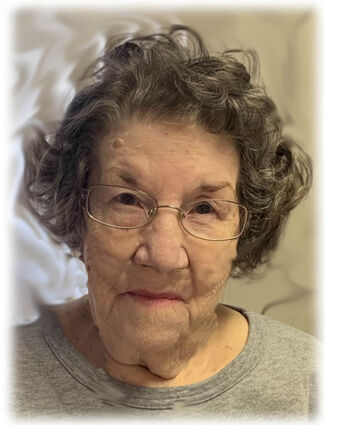 Services will be held Friday, June 24, at 10 a.m., at St. Joseph's Catholic Church in Plentywood.

Father Arumugam Ananda Kumar will be officiating the service.

Interment of Gert and Buzz's remains will be at the old section of Plentywood Cemetery immediately following the service. Lunch will be served at the church following interment.

Gert attended St. Thomas in Great Falls, Mont., her freshman and sophomore years winning the Geisey Foundation award her freshman year. She attended Plentywood High School her junior and senior years and graduated from there.

Gert was proud to have a chauffeurs license.

In April, 1949 Gert began a 32-year career with Mountain Bell, working in Plentywood, Culbertson, Wolf Point and Glasgow. Gert took the last call to the Glasgow office before it was switched over and the office terminated. She moved to Billings to accumulate the time she needed to retire at age 54.

Gert was a member of the Telephone Pioneers, Moose Lodge, and Huntley Garden Club.

Gert was a Catholic with a deep belief in God.

Gert loved horses, dancing, cake decorating, cooking and trying new recipes. She and Buzz enjoyed collecting and selling antiques and vintage items through their small store in Huntley, Mont. Crocheting and gardening were favorite pastimes. Family was most important to Gert and she always remembered birthdays and anniversaries.

Gert was preceded in death by her parents John and Esmer Fink; her siblings Theresa Trewyn and her husband Duane and Joseph (Chub) Fink and his wife Phyllis; her husband Marvin "Buzz" Strand; and her son-in-law Richard Kerstein.