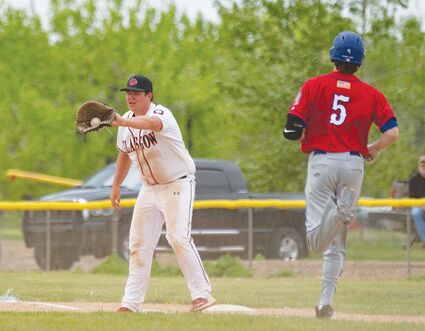 Rance Rhoads makes an easy out at first base during the Reds' home opener against Laurel June 5. Rhoads had a huge weeekend in Watford City with a grand slam, a home run and a winning performance on the pitcher's mound. He racked up 15 RBIs on seven hits over four games in this past weekend's tournament.

The Glasgow Reds traveled to Watford City, N.D., this past week for the annual Watford City Tournament. Glasgow won their first two games against Dickinson, N.D., 16-1, and Glendive, 17-9, before falling to Lovell, Wyo., 8-7. The loss sent them to...