Opheim's Graduates Have Bright Futures Ahead Of Them 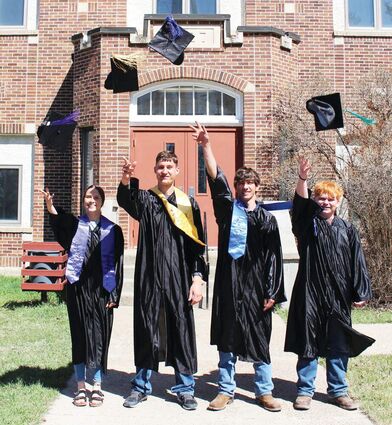 The Opheim Class of 2022 might have been small with only four graduates, but they are all motivated to secure their own pathways and be successful. Of the four graduates, Cole Taylor, Mandy Fuhrmann and Zach Fauth, were awarded a number of different scholarships between them totaling $833,450, as of May 23.

"For as long as I can remember, I have known I was going to serve in the U.S. Army. A large portion of this desire can be explained by my father's service of 26 years, something that has greatly inspired me," explained Taylor on why he accepted the appointment. "I plan to study economics and military science. I have decided to attend USMA in order to position myself in the best possible position to serve my country. As for the academic choice, I plan to study economics because I find it to be an interesting and necessary study. I know that I can pursue business or perhaps politics after I end my military career, both of which are of interest to me."

Taylor admits while going through the process of applying for these scholarships, it really opened his eyes to everything he has been involved in throughout his high school career. "The scholarships have also led to a refreshing revelation. Throughout my high school career, I have kept extremely busy with my athletics, academics, community service, clubs and other activities. While there are many rewards for the efforts, none were so obvious as the awarding of scholarships and acceptance and appointment to West Point. It was great to see that hard work pay off," stated Taylor.

Mandy Fuhrmann was offered $5,500 between the Donald J. Baker UC Scholarship, Eastern Montana Yellowjacket Scholarship, MSUB Excellence Scholarship and the Jeff Jergen's Memorial Scholarship and she accepted all of the scholarships offered to help with her future plans of attending MSU-Billings in the fall. "I decided on Billings because it isn't too far from home. I really loved the dorms and the campus itself. Also the people are all so friendly which made it feel like home," explained Furhmann. She will study elementary education and proceed with her track and field career as a Yellowjacket. She is very grateful for the opportunity these scholarships provide stating "These scholarships are important to my future. These are helping me pay for my education. Education isn't cheap and without these funds, I would have to pay more out of pocket."

Zach Fauth was awarded $10,000 between the MSU Treasure State scholarship and the MSU Premier Scholarship. He has plans on running his own ranch. The fourth senior, Damian Cable, has plans to attend Western Montana College to study drama and music.

Both Fuhrmann and Taylor credit the community, their friends and their family for their successes and helping them prepare for the future.

"Opheim had really prepared me for the next step in life. Mrs . Taylor, my Advisor, English teacher, and guidance counselor is the one to thank. She encouraged me to take college classes while still in school to get a feel for the college life and to understand the standards that college will expect. Showing my class [what] professors expect helped us all feel ready for college. The community helped me feel a lot of support going into the next step. Just a simple "call if you need anything" or "come visit when your on break" is really heart warming. So many people in the community have helped me grow into the women I am today. I am so blessed to be surrounded by these people. Without my family, friends, and community I wouldn't be where I am at today. They all have impacted me in so many ways. I would like to say a huge Thank you to them all," explained Furhmann.

"The Opheim school and Opheim community has greatly helped in preparing me to pursue, and even attain appointment, to the United States Military Academy. Both have also been instrumental in acquiring each of the scholarships that I have received. The school provided a system of education that worked well for me. Participating in the clubs, sports, and activities during high school allowed me to develop the skills necessary for success. Additionally, a unique aspect of Opheim High School, I was able to pursue college classes at a level that is unthinkable in other local schools. I was able to graduate high school after taking 12 college classes from Miles Community College for a total of 42 credits. The Opheim community has also been helpful and supportive in my endeavors. From supporting fundraisers, helping with service activities, to even their simple acts of support and encouraging words, the people of Opheim and the surrounding community have been of great help. I would like to say thank you. The opportunities that have been given to me have been innumerable and exceptional. My community, family, friends, parents, teachers, professors, coaches, and my faith have all been crucial for the success I have been blessed with," explained Taylor.