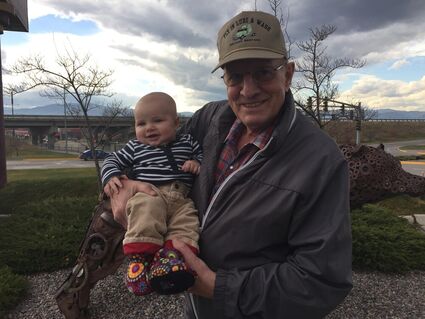 He was born Aug. 7, 1947, in Glasgow, Mont., to Calvin and Martha Reddig. He was raised on the family farm in Lustre. He took pride and joy in sharing stories of his youth helping his father Calvin with harvests and daily chores. He also enjoyed playing basketball. The second floor of the Reddig barn was where you could find him playing basketball with his brothers and cousins. For high school, he attended Lustre Christian High School where he graduated in 1965. He attended one year at Tabor College in Kansas in 1966. After that, he attended Montana State University (MSU). He joined the AGR Fraternity and met some dear friends to him including Larry Lancaster. He relished in sharing college stories with his kids for years to come, and carried a deep love for Bobcat football. While attending MSU, he joined the Army National Guard, and he continued from 1970-1976. Weldon graduated in 1970 from MSU with a bachelors in animal science.

A few years after he graduated, he bought a farm west of Glasgow. He met Jacklyn Miller in 1974, and they were married on June 28, 1975. They welcomed four children to their home, Zachary, Zane, Allison, and Lisa. The years on the farm were spent growing corn, wheat, alfalfa, and raising cattle, including 4-H steers with his sons. His daughters have fond memories of attending Girl Scout father/daughter dances with their dad. Over the years, besides his work on the farm, he also worked for Valley Vet Clinic, Glasgow Livestock Sales, and drove truck for Page Whitham. Weldon and Jacklyn divorced in 1994.

After that, he became a full-time long-haul truck driver. He drove thousands of miles over the years. His children joined him for a road trip now and then, and once they were older, he'd get together with them for a meal when he was driving through town. He always had an interesting story to share, watched hours of old westerns, loved listening to the radio, and enjoyed any phone call with his kids to discuss life's events.

Weldon drove truck until 2021 when he retired. Upon retiring, he moved to Missoula, and about six months later made his way back to the Hi Line with his son Zach, and daughter-in-law, Beth. During his retirement he got to attend a Bobcat football game, visited with extended family, and spent hours reading books and hanging out with his best friend, Zach's dog, Hank. He will be remembered for his infectious laugh and smile that brought joy to everyone's face.

He is proceeded in death by his parents, Calvin and Martha Reddig; his step-mother Mary Reddig; his brother-in-law Bruce Boyum; and two nephews, Benjamin Laws III and Jeromy Reddig.