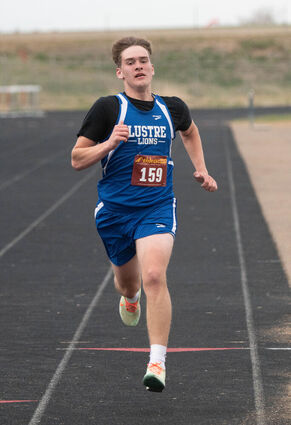 Cayden Klatt runs the home stretch of the 3200 meters at the Norm Girard North/East Top 10 meet in Glasgow May 3.

The Lustre Christian Lions made an impressive showing in their final week of the regular season with appearances at the Norm Girard North/East Top Ten Tuesday in Glasgow, the Gene Nelson Memorial in Wolf Point Friday and Hinsdale's Jean Dreikosen Memorial Saturday in Glasgow.

Braden Ewing, Cayden Klatt and Elijah Lenihan hit the field for the Lions at the Top Ten meet. Both the boys' and girls' teams put up points over the weekend. The Lion girls tied for eighth in Wolf Point with 6 points while the boys took fifth with 30 points. Before the Hinsdale meet was called for weather, the girls stood in fifth with 18 points and the boys had earned 17 points for fourth place.

Ewing earned two medals at the Top Ten meet, with a second place long jump and third place in triple jump. He set a personal best in the long jump at 19-09.50, just shy of a seven-inch improvement over his qualifying jump of 19-02.75. He took third in triple jump with a distance of 40-06.00.

Cayden Klatt set a personal record in the 3200 meters, running the event in 12:09.34. Lenihan competed in the high jump, but was unable to clear a height to place.

Rebekah Jossart and Alexa Reddig earned points for the Lion girls in Wolf Point. Jossart ran a 6:47.98 in the 1600 meters for fourth place while Reddig set a season record of 19.28 in the 100 meter hurdles for fifth place.

Jossart and Reddig, along with Valentine and Dahl earned points for the Lustre Christian girls at the Jean Dreikosen meet.

The Lustre Christian Lions begin their postseason Saturday, May 14, at the District 2B/3C Track Meet in Glasgow with events beginning at 9 a.m.