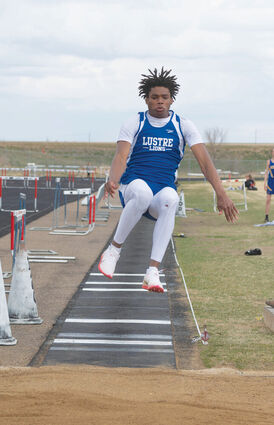 Lustre Christian's Braden Ewing won the triple jump at the Whitewater/Saco Invitational in Glasgow April 30 with a distance of 39-11.00. He placed second in long jump at 18-05.50.

The Lustre Christian track teams traveled to Glendive last Thursday for the Elks Invitational and to Glasgow on Saturday for the Whitewater/Saco Invitational. The boys team finished 11th in Glendive with 12.33 points and sixth in Glasgow with 43 points.

Ewing, Klatt, Lenihan and the 4x100 relay team scored points in Glasgow at the Whitewater/Saco Invitational.

In the girls' competition, Rebekah Jossart set a personal record of 6:42.83 and placed ninth in the 1600 meters. Jossart, Meredith Valentine, Sarah Dahl and Alexa Reddig placed 10th in the 4x100 relay with a time of 1:07.10.

Lustre Christian will attend the Wolf Point Invitational Friday, May 6, and then attend the Gene Dreikosen Hinsdale Meet on Saturday, May 7, with events starting at 9:30 a.m. on Scottie Field in Glasgow.