Frazer Bearing Down on Postseason 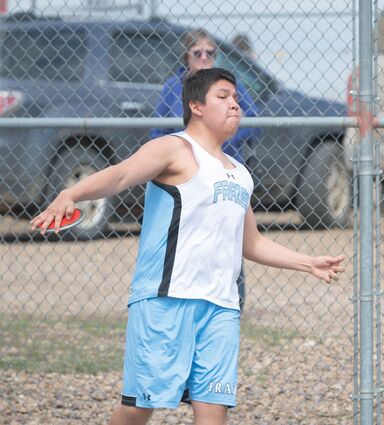 Frazer's Joseph Beston competes in the discus at the Whitewater/Saco Invitational April 30 in Glasgow.

The Frazer track teams attended the Glendive Elks Invitational on Thursday and the Whitewater/Saco Invitational in Glasgow on Saturday.

Baily Beston was the lone Bearcub to compete for the girls in Glendive. She took 80th place in the 100 meters with a time of 16.65.

In Glasgow on Saturday, B. Beston was joined by Angel Nelligan and Shakira Beston in the girls' competition.

Frazer will attend the Wolf Point Invitational Friday, May 6, and attend the Gene Dreikosen Hinsdale Meet on Saturday, May 7, with events starting at 9:30 a.m. on Scottie Field in Glasgow.