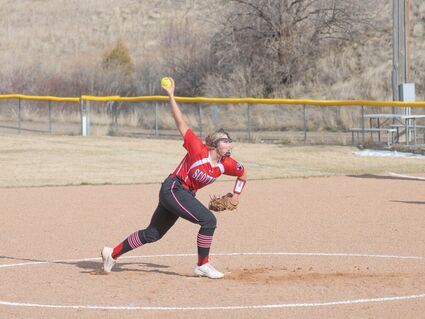 Daley Aune releases a pitch during Glasgow's 12-0 win over the Miles City Cowgirls April 19. The Scottie spent two innings in the pitcher's circle, throwing three stikeouts and a 51.2 strike percentage.

The Glasgow softball squad made the most of their one game last week with a shutout win over the Custer County Cowgirls at home April 19. The Scotties won the game 12-0 in four and a half innings, powered by a 10-run performance in the bottom of the second.

Aune notched two more strikeouts in the top of the second inning while catcher Stevie Hartwell connected with shortstop Partridge to catch a Cowgirl attempting to steal second base.

Back at the plate, the Scotties began their offensive onslaught. Tatum Nyquist was the first of the inning to score, crossing home when Zandora Longtree singled. Two batters later, Hartwell doubled a fly ball to center field and sent Alyssa Murdock, Longtree and Ashlee Meland home. Hartwell moved to third on an Aune bunt and crossed the plate when Macy Martin was walked.

Nyquist, in a repeat of her first time at the plate, was walked and sent Partridge home. Carly Nelson then doubled on a line drive to left field, batting in Aune and Martin. Murdock then grounded out, but Nyquist scored and Nelson moved to third base. Longtree singled to left field and Nelson completed her trip around the infield to take the Scotties to 11 runs.

Meland took over for Aune in the circle in the top of the third as the Cowgirls went three up, three down with a single, fielder's choice and a fly out to center fielder Martin.

Partridge was the lone Scottie to score in the bottom of the third, touching home when Aspen Stulc was walked. Neither team managed a run in the fourth inning.

In the top of the fifth, Partridge moved to the pitcher's circle for Glasgow as Custer Country again went three up, three down. The Cowgirls notched two groundouts before Partridge struck out the final batter of the game.

Glasgow outhit Custer County 9-2 in the game with neither team committing an error.

Hartwell led the Scotties in RBIs with three, going 2-for-3 at the plate. She also had seven chances in the field. Nelson and Longtree each added two RBIs with both players hitting 2-of-2 at bat.

Longtree had two stolen bases to lead the Scotties while Murdock and Nyquist added one a piece.

The Scotties were in Havre April 25 to take on the Class A Blue Ponies. The Blue Ponies won by a score of 10-6, making th Scotties' record 4-5 overall.

Glasgow plays host to the Scottie Softball Slam this Friday and Saturday, April 29 and 30, at Sullivan Park.