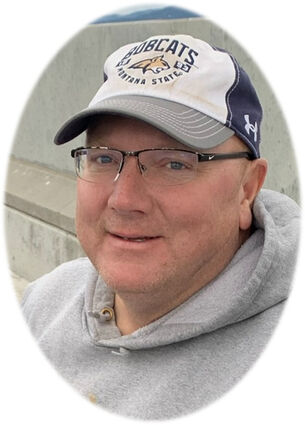 Ryan Lee Nelson, age 44, passed away peacefully on his farm from natural causes on Tuesday, April 19, 2022.

He was born on May 7, 1977, in Glasgow, Mont., to Carl and Karleen Nelson. Ryan attended school in Opheim, Mont., and was involved in numerous activities with baseball, drumming and socializing being a few of his favorites!

He started his college career at Williston State University and completed his degree at Montana State University. Needless to say, Ryan was a huge Bobcat fan and recently made the trip to Texas to watch the Cats play in the National Championship.

After college, he took a job at Farmer's Union in Worden for a short while, before returning to his hometown in 2002, to become an agronomist at Pro Co-op. Ryan served on several boards during his duration at the Co-op, always striving to learn new ideas and help farmers to the best of his ability. He began introducing pulse crops in the area and his marketing skills excelled. After several years of working for the Co-op, he had the opportunity of becoming the general manager where his business savvy continued in the advancement of the company with the addition of a large fertilizer plant and bulk fuel station, along with many other improvements.

In 2012, Ryan married Chelsea Warren and together they have three beautiful children: Connor (8), Natalie (7), and Emily (3). He truly loved to have his son Connor by his side in the tractor, teaching him the ins and outs of farming. He enjoyed his daughter Natalie's companionship while they checked cattle and her horse, Cooper. Lastly, Emily was always waiting at the door for dad to come home to read a book or watch Emily's favorite cartoon, Bubble Guppies! He was continually teaching his children new ideas and always striving to provide for his family.

In 2014, Roger and Glenn Kleeman gave Ryan the opportunity to fulfill his lifelong dream of becoming a farmer/rancher. He purchased the Kleeman Ranch at Peerless. He was a hard worker and was always scheming of ways to expand his business. Ryan was a "Dreamer"!

Ryan loved to entertain family and friends wherever he went. He had a huge heart and was always wanting to please people and make them happy. Most people knew him by his nickname "Puppy." He was always checking in on his numerous friends and family members. He loved to visit and make everyone smile. Ryan was always up for an adventure whether it be hunting, snowmobiling or spending time at Fort Peck Lake. Lots of memories were made with friends and relatives on these outings. Holidays were a highlight in Ryan's life, especially Christmas. He loved to spoil his nieces and nephews, always making sure the coolest gifts came from Uncle Ryan. His contagious personality and love for life will be missed by so many.

Ryan is survived by his wife Chelsea and their three children: Connor, Natalie and Emily; his mother and stepfather Karleen and Roger Kleeman, of Billings, Mont .; brothers, Kevin (Tami), of Opheim, and Scott (Dawn), of Glasgow; his grandmother, Hilda Rosencrans; numerous nieces and nephews, BriAnn (Austin), CJ, Kortney, Carly, Coy, Alexa, Walker and Wyatt; and two great-nephews, Clint and Colter. He is also survived by his mother-in-law and father-in-law Del and Shari Warren; sister-in-law, Stacy (Dan) Hauptmann; brothers-in-law, Brady Warren and Ted Welchlin, along with his many wonderful friends

He is preceded in death by his father, Carl; his brother, Clint; uncles, David Nelson, Bill Westby and Hoyle Moore; grandparents, Clinton and Elsa Nelson and Carl Swenson.