Scottie Boys Do a 181 for the Win in Baker 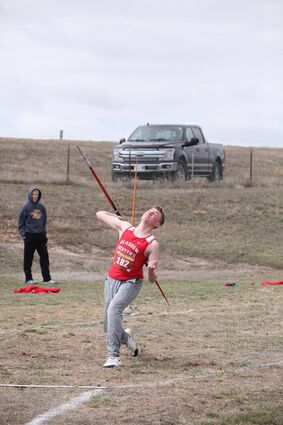 Vaughn Miller throws the javelin at the Baker Invitational April 9. The Scotties won the event with a personal record of 149-11.

Dalton Sand, Kyler Holinde, Vaughn Miller, Stephen Bailey and the boys' 4x100 – Bergen Miller, Sand, Reed Larsen and Ted Tryan – were on top of the boys podium while Tanae Baker and Iris McKean were the top finishers on the girls' side.

The boys' 4x400 relay team ran the race in 3:53.34 to win, more than four seconds faster than their nearest competitor. Tatum Hansen, Toryn Richards, Nick Solarzano and Tryan took sixth in the 4x100 relay with their time of 48.97.

Hansen and Mason Donaldson earned points for the Scottie boys in the 110m hurdles with Hansen taking third and Donaldson placing fifth. Hansen ran an 18.78 while Donaldson set a personal record at 19.75. 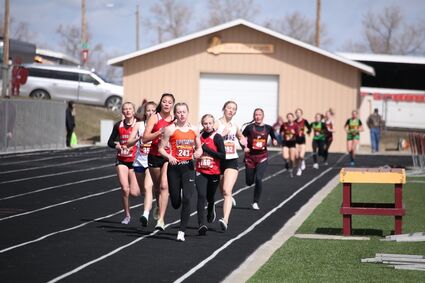 Iris McKean, center in Scottie red, Emily See (left) and Tanae Baker (right) in the second lap of the 1600 meters. McKean won the race, completing the four laps in 5:46.16. Baker took fourth with a personal record of 5:53.34. See claimed sixth place after running the race in 5:58.85.

Bailey and Stone have both already qualified for the State Track meet based on their performances in the pole vault.

The Wibaux Invitational, which was scheduled for Thursday, April 14, has been canceled. The Scotties will be back in action Saturday, April 23, at the Sidney Invitational.