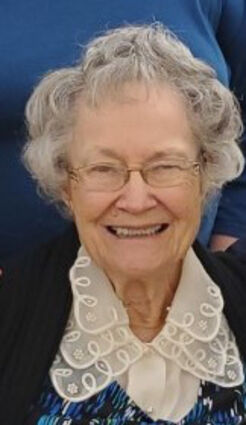 Helen DePuydt of Saco, Montana, passed away in the early morning of February 16, 2022, at the Frances Mahon Deaconess Hospital in Glasgow, Montana.

Helen was born on March 31, 1931, to Robert Elton (Doc) Welch and Carolina (Schwertmann) in Malta, Montana.  Helen was the youngest of four children. The Family lived on a homestead 35 miles south of Malta until 1935 when her father passed away. The Family then moved to Malta.

Helen attended school in Malta till 8th grade. She and her mom then moved to the town of East St. Louis, Illinois, to live with an uncle for a year while World War II was being fought (her two older brothers Robert and Charles fought in that war) and attended a Catholic school for a year. Helen's mother, Carolina worked in a factory making ammunition for the war while they lived there. They returned to Malta, and Helen graduated from Malta High School in 1949. While in high school, Helen began working part-time as a secretary at Malta Motors.  She met Louie DePuydt at a young people's dance at Wagner, Montana, while she was a junior in high school. They married on June 18, 1949, the summer after Helen graduated from high school.  They began farming and ranching 20 miles north of Saco where she resided until her passing.

Helen became an "Executive Homemaker" on the farm.  Helen and Louie raised nine children and were active in the Catholic Church their entire lives. Helen loved her children and grandchildren unconditionally.

She enjoyed gardening, growing flowers, sewing, quilting, writing factual articles for newspapers, and baking bread. She made her last batch of bread two months before her death, at the age of 90, only two months shy of 91.  This process includes cleaning the home-grown wheat by hand, grinding it in her mill, mixing it by hand, letting it rise twice, and baking it.

As a result of her love for writing, two books about life in the early days of Phillips County have been published with the help of her youngest daughter, Theresa Johnson.