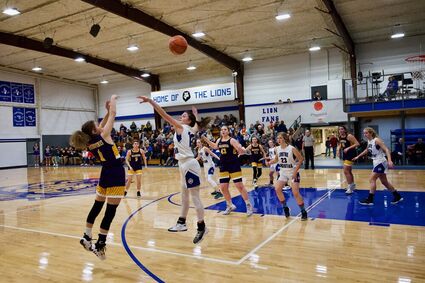 Nashua's Alyssa Murdock takes a shot from three-point land with Lustre Christian's Alexa Reddig defending. (A full gallery of the game is available on the Glasgow Courier's Facebook page: https://www.facebook.com/glasgowcourier)

The Nashua girls basketball team lost both of their games this past weekend, falling 37-28 to the Lions in Lustre on Friday before losing 62-47 to the Red Hawks in Lambert on Saturday.

In Lustre on Friday, the Porcupines hit the hardwood against a hungry Lions team. The hosts took an early 11-4 lead in the game and increased it to 18-10 at the half.

Nashua trailed 33-18 heading into the final quarter. They outscored Lustre 10-4 in the last eight minutes but were unable to catch up to the Lions.

The Porcupines were called for 13 fouls in the game. Adkins was called for four while Madison Harris, Deja Morgan and Miller had three fouls a piece.

In Lambert on Saturday the Porcupines mustered more offense, hitting double-digit scoring in each quarter. However, they were outpaced by Richey-Lambert over the course of the game while running into foul trouble.

Nashua led 12-6 at the end of the first, but Richey-Lambert rallied in the second with 24 points to carry a 30-24 lead into halftime. The Red Hawks outscored the Porcupines 19-11 in the third and 13-12 in the fourth for the win.

Nashua was called for 24 fouls in the game, eight in the second half. Adkins, Miller and Dees fouled out of the game while Alexis Murdock and Morgan were called for four infractions each. Harris had two fouls.

Nashua is scheduled for travel to Whitewater Friday, Jan. 28 to play the North Country Mavericks and to Dodson on Saturday, Jan. 29. Fans should check the Nashua Porcupines Facebook page for up-to-date information on game times and/or potential postponements.

The JV girls are scheduled for a 3:30 p.m. game in Whitewater followed by a four 4-minute quarter JV boys game at 5 p.m. Girls varsity will play at 6 p.m. and the boys varsity game will begin at 7:30 p.m.

In Dodson, a shortened JV boys game is scheduled to begin at 3 p.m. followed by girls varsity at 4:30 p.m. and boys varsity at 6 p.m.