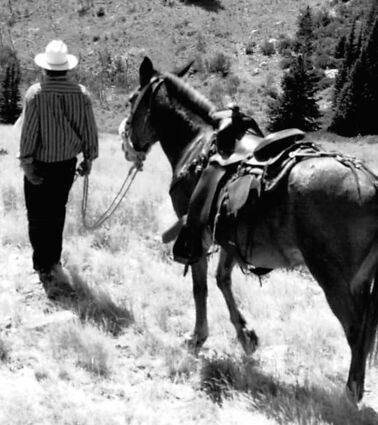 Robert "Bob" V. Harmash passed away of natural causes, at his home December 16, 2021 at his home in Fort Peck, Montana.

Bob was born in Syossett, New York, to Edward and Margaret (Hoffman) Harmash. He was the eldest of their three children with sisters: Barbara and Margaret "Candy". He grew up in New York attending Catholic Schools (his stories about the nuns were entertaining) and becoming a free spirit. Highlights of this time include being a bodyguard for Janis Joplin and building the Woodstock stage.

He moved to Montana in the late 1970's settling on the East Fork of the Bitterroot River in Sula. It is here he continued his passion for the outdoors living in a hunting and fishing paradise. He ran a salvage yard, logged, farmed and raised saddle and pack mules.

Bob had four children during this time: Wyatt and MegAnn with his first wife, Vinnette. They separated and Bob married Mary Margaret Windsor. From this union Bob had two sons, Mathew and Patrick. They divorced. Bob met his wife, Lanette in 1987, while she was teaching in Darby. After spending many adventures together each finding their soulmate, they were married in 1990.

Bob sold his East Fork Ranch and then he and Lanette moved to Almo, Idaho to begin a new life together. They restored their first home using much of the Pondarosa Pine that Bob had logged in the Bitterroot. They also built a beautiful rock garden out of 500 pound to two ton boulders. His quality craftsmanship is still visible there as they sold their ranch to the Idaho State Park. It is now Castle Rock State Park. They returned to Montana in 1999 and settled in the river bottom south of Nashua. It is here Bob established the Confluence Hay Ranch and he and Lanette farmed until Bob's retirement. Undaunted by the need of a house, they moved a 1924 Sears Craftsman house to the property and restored "This Old House" number two. Bob and Lanette enjoyed life together building, gardening, hunting and fishing on the lake, river, or ice.

Bob developed many long and enduring friendships over the course of his lifetime, especially recent fishing partners Steve and Sam. He lived life with passion and integrity.

Bob was preceded in death by his parents and son, Wyatt.

He is survived by his sisters, Barbara (Tom) of Maine and Margaret of Maine; daughter, MegAnn of Lake Tahoe, California; sons, Matthew in Europe, and Patrick (Jill) of Kalispell, Montana; his wife of 31 years, Lanette; grandson, Hunter of New York; numerous nieces and nephews (especially Joe) and his boy dog "Sioux".

As per his wishes cremation has taken place. A celebration of Bob's life will be scheduled at a future date. Condolences may be left for the family at bellmortuarymontana.com.