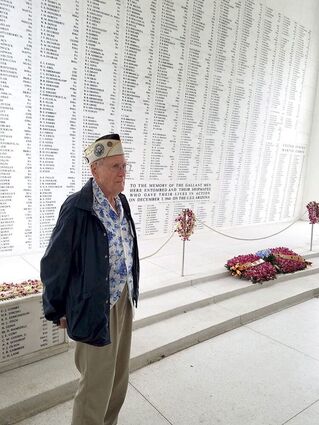 Tom Berg is seen here in Pearl Harbor during the 75th anniversary of the surprise attack by the Japanese on Dec. 7, 1941.

Tuesday marked the 80th Anniversary of the surprise attack on Pearl Harbor, a day which will forever "live in infamy."

It is hard to believe eight decades have gone by already, and there are fewer and fewer veterans who were around that day to tell the story.

In 2016, I interviewed Tom Berg of Port Townsend, Washington over the phone. He was in Hawaii for 75th anniversary of Pearl Harbor attack.

Berg enlisted in the Navy at the age of 18 in 1940. He said he requested assignment to the USS Arizona, because a friend was stationed there. He was assigned to the USS Tennessee instead.

On Dec. 7, 1941, Berg was serving as a crew member in one of eight boiler rooms aboard the USS Tennessee. That morning, Berg was topside taking a break after prepping his duty station for inspection.

"About a quarter to 8, we went topside and walked throughout the fo'c's'le [forecastle] deck," Berg said. "As I came down the ladder to the main deck, I saw this airplane coming out of this strafing run on the north end of Ford Island, and I was looking past the [USS] Arizona to see this airplane. He pulled out of his dive and he flew right over me."

Berg "looked up at the plane and here was a great big red circle under the wings. My thought was so far away from any Japanese being around. I thought, 'Well, the Army Air Forces [are] really decorating their planes to make [their] military exercises authentic.'"

Berg went back below deck. He had no idea a genuine attack had commenced.

The USS Tennessee was a nested pair with the USS West Virginia and moored inboard toward the island. To Tennessee's stern was the USS Arizona, and the USS Maryland was just ahead of her, berthed inboard the USS Oklahoma.

When "the first torpedo hit the West Virginia, [it] slammed against the Tennessee and that boosted me right out [of the] bench that I was sitting on," Berg said. "We knew something was wrong, so we ran to the access plates to get down in the engineering spaces and a couple of other torpedo hits, I think, shook the ship so much that many people ... fell down on the decks because of the jolt."

While crew members on deck began firing at the Japanese planes, Berg and his crew "got down in the boiler room and proceeded to light the burners, which we always do in general quarters [to] get the ship ready," he said.

Below decks, Berg relied on telephone reports from a fellow sailor topside to find out what was going on.

"He was describing the scene, what was going on, and that was the devastating part," Berg said. "He told about the West Virginia sinking, the Arizona had fires on it and the Oklahoma ... was turning over and they were bombing other ships near the shipyard. I am relaying all of this information to the other five guys that [were] in the boiler room."

Shortly after 8 a.m., a bomb hit the forward ammunition magazine of the Arizona, causing a massive explosion.

"It just shattered the front end of the ship," Berg said. "The explosion was so great that it caused concussion down our smokestack down into our boiler, which blew the fire [from] the six burners on each boiler ... out into the operating space and I guess singed a lot of eyebrows."

During the attack, USS Tennessee was struck by a pair of armor-piercing bombs, according to pearlharbor.org. The first bomb struck the center gun of turret two and disabled it entirely, while the second crashed through turret three.

At night, Berg emerged again from below decks.

"Honolulu was completely blacked out and the only light there was [originated from] the fires on the West Virginia ... and the Arizona," Berg said. The Arizona had sunk with a loss of more than 1,100 men.

Berg went on to serve as a submariner, and survived the war.

He returned to Washington and went to work for Boeing as a draftsman. In 1950, he began working at the Puget Sound Naval Shipyard. In July 1977, he retired at the age of 55.

Throughout his life, Berg was an avid violinist. I met him in person about two years ago. He was spry for his age, and had a twinkle in his eye. When I met him, he was the oldest player in the Port Townsend Symphony Orchestra. He still played on a violin he got in 1938 from a violin pawn shop in Portland, Oregon. The violin, a copy of a Stradivari, had gone with him aboard the Tennessee, and had escaped damage during the attack because it was hidden beneath his pea coat in his quarters below the waterline.

Berg, I just learned while researching this column, died on April 24, 2020.

I am glad I got to meet Berg in person, and hear his stories from the war. Berg was a kindly old man who lived life to the fullest, a prime example of the Greatest Generation that refused to live in fear despite incredibly trying times.

May we never forget that day, and those who were there.