SPECIAL TO THE COURIER 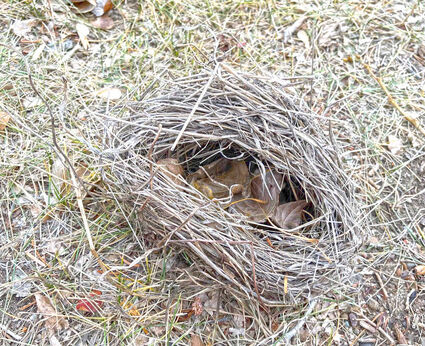 I'm pretty sure everyone has talked about, commented on, or complained about the recent two-day windstorm we had. Wasn't that a doozy? It showed how vulnerable we are to Mother Nature. And yet we need to be grateful our winds weren't accompanied by rain and/or sleet or snow. The northwestern coastal areas have it so much worse than us. Flooding and mudslides are harder to recover from.

And aren't we grateful we have houses to shelter in? Shingles and roofs can be repaired, unlike the bird nests that were torn loose from their tenuous moorings. I took a quick (because it's still on the cool side) walk through my yard this morning, enjoying the relative calm of little to no wind. I was amazed that many of those fragile, delicately constructed nests are still anchored in my trees, shrubs, and bushes. Some birds really know a thing or two about construction - or they're geniuses at choosing their nest-building location.

My previous paragraph sent me off on a tangent, searching on-line for the differences between shrubs and bushes. The main thing I found is that shrubs can be groomed or pruned into shapes, while bushes are generally left to grow wild. Although that opinion gets thrown out the window in the case of some rosebushes. Some define shrubs as having a single root or base, and so can't be divided. But these are opinions only. Use whichever term you prefer to describe woody growths that aren't large or tall enough to be called trees.

That concludes my "gardening" section of this week's edition of my Green Spaces column. I'll move along now to the obligatory (it's my own ruling) winter month recipe babbling.

I clip a lot of recipes (farm & ranch publications, and magazines) as well as search them out on-line (for specific ingredients). The on-line ones get scribbled out on notepads. Some get used, others don't. Sometimes those notes sit for quite a while before I try them. The good ones make it onto actual recipe cards (and into this column). The icky ones get tossed (and you won't see them!). This salad recipe sat for about a year. I'm now sorry I didn't try it sooner.

I didn't have a cucumber, so chopped in fresh raw broccoli. I left out the tomatoes because they lose flavor when refrigerated, but add them to each serving. I also left out the pepperocinis, and used a smaller amount of dried parsley, which I added to the dressing to rehydrate. I'll zest lemons and freeze the zest, storing it in a small plastic container. It's easy to scrape some off the frozen glob when I need some. A tablespoon of jarred lemon juice roughly equals 1 lemon.

I didn't use the entire dressing at once, which was a good thing as the couscous soaked it up (being a pasta) as it sat in the fridge, which blunted the flavor. If you don't think you'll consume the entire salad at once (which I knew I wouldn't, being as Dennis wouldn't even taste it) save half the dressing to add the next time you serve it. I'm sure I'll be making this dressing for other purposes, such as drizzling over steamed broccoli and/or cauliflower, or even raw veggies.