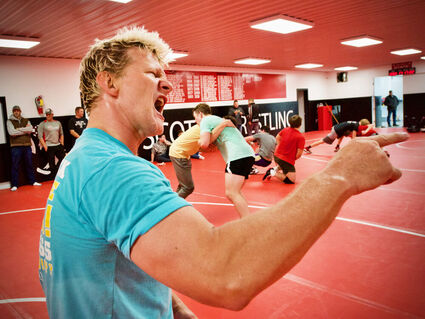 Wrestling coach Mike Krause, the most sought after youth wrestling coach in the nation, brought his experience to the Glasgow Wrestling Club for a two-day clinic Nov. 3-4. This is Krause's third time in Glasgow. "The benefit is for our young kids," said Glasgow wrestling coach Jory Casterline, "the enthusiasm he has." Scottie senior Austin Hughes, who has attended a Krause clinic before, called the event "very high tempo." Casterline marveled at Krause's ability to take command of a room of wrestlers and said the coach makes the most of his time with the young athletes. These guys can get more out of a two-hour session with Krause than they sometimes can at other events, the Glasgow coach explained. Casterline praised Glasgow Wrestling Club president Brady Flaten for making the arrangements and his behind-the-scenes work to bring Krause back to Glasgow. He also said this will be an ongoing working relationship between the wrestling titans. "This is a free event to our members," Casterline said. He hopes all parents and coaches, in addition to the grapplers, will be on hand at future events to learn and seize an opportunity to improve.