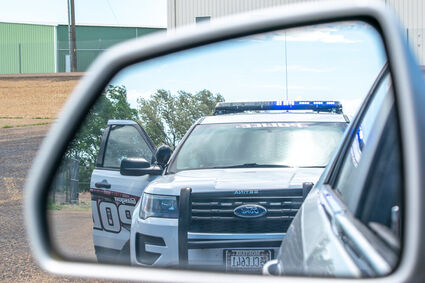 • 1212 – BCSO called to state they received a 911 call from a male stating his wife is traveling east on US Highway 2 and is at MM555 where a car went into a ditch. The 911 operator was unable to give much more information but supplied the phone number to the original party. At 1215, contacted the original caller and got vehicle information and plate. He stated his wife called him about a vehicle that was traveling at a high rate of speed. It passed his wife's vehicle and then went into the ditch. At 1218, RCSO was notified of the vehicles traveling their direction. 1220, MHP was notified. Per a deputy, UTL to county line.

0010 – An officer saw a person walk through park and back to vehicle. Per the officer, just playing Pokeman Go.

• 0930 – A female called in stating she is having problems with a female who she used to work with. She gave a first name but she doesn't know her last name. She states the individual pushed some rolling carts toward her while she was mopping the floor and sort of boxed her in. She said the female never touched her but it was done on purpose. She states further this all started when the calling party and her husband moved out of a rental. She stated they left there because the landlord wouldn't fix the heat in the apartment. The calling party says now the female is driving by her new apartment quite often, and she feels she is being harassed by her. She wants this on record as the female hasn't done anything yet but she has been told that she may have one of her friends do something for her. Advised the caller dispatch would have an officer call her back. She is fine with that.

• 0951 – A female called in to report she has backed into another vehicle. Asked if anyone was hurt, she said no, but there is damage to the other vehicle and no one is around. She doesn't know who it belongs to. An officer advised he spoke to both parties and they have exchanged information and will handle this themselves.

• 1156 – A female called in stating she has had her wallet stolen. It had her license in it, her bank card, her SS card and medical cards. She also has had her two iPhone minis stolen. She also states that everything in her house has been taken and moved into a storage building and she cannot get her things. She also stated that on 10-09-21 she was assaulted at her house when she got home.

• 1644 – Caller reported someone has been stealing his rebar. The rebar is located on the two vacant lots he owns. The suspect took about 10-12 1/2" sticks of 20' long rebar. They also messed with some bigger rebar but weren't able to get it. Patched him up with an officer.

• 2311 – A female called advising a vehicle had been following really close behind her with its brights on. She advised she would slow down to try to get the truck to pass her and it would not. She called back to update the vehicle turned off in Hinsdale. She advised she would still like this checked out. She stated she believes this started by her accidentally flashing her brights and then he was behind her with his brights on. Deputies will check out the Hinsdale area.

• 1949 – Caller reported they're working on some units at St. Marie. His father stopped at one of the units. The lights were on inside, and then someone shut them off. His dad is sitting outside . The caller is also going to head that way. Per a deputy, everything alright. Clear of the residence, will cruise around St. Marie a bit longer.

• 2102 – Caller reported he hit a deer about one mile north of the Gateway by Taylor's Storage. He wasn't injured. He was on his way to pick up his wife at the time. He's at home now. His wife believes she saw a deer laying by Taylor's Storage when they went by. Not sure if it's dead. The plastic around the headlight is busted. The RP informed an officer there's under $1000 worth of damage. He was instructed to pick up a white form. Officer advised the deer is dead and off the road, not a hazard. Left a message for DOT.

• 1144 – BLM out with two vehicles and two male subjects. Ranger requested a card on this incident.

• 1347 – A female called in requesting MHP officer. She states there is a vehicle pulling a trailer weaving in and out of traffic, passing vehicles on solid lines. There was a wind turbine that was out there and he tried to pass that too. She said this vehicle is being very unsafe.

• 1636 – An officer requested a card. He stated he got stopped by a male. He was told the Evangelical Church has been having a bunch of garbage, beer cans and other things thrown on their property. They would like officers to keep an eye on the property and, when church is not in service, they would like there to be no one else on the property.

• 2010 – Caller reported he hit a deer. He believes the deer ran off. He's not injured. There's damage to the headlight, fender and body damage. Advised him officers will be en route to his location. His insurance company dispatched a wrecker. A deputy advised the vehicle is off the road and not a hazard.