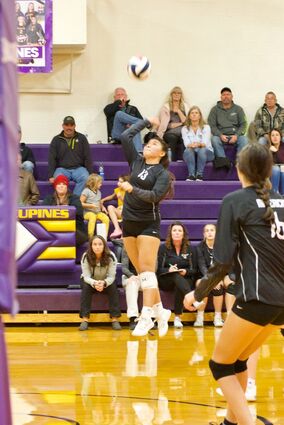 Zandora Longtree winds up to play the ball over the net during the North Country Mavericks' win at Nashua Oct. 19.

Zandora Longtree led the Mavericks in aces with eight. Page Wasson added four, Kora LaBrie three, Jaycee Erickson and Shelbi LaBrie two each and Teagan Erickson one. Kendall Scheffelmear racked up 11 kills in leading North Country. She was followed by Wasson with seven, T. Erickson six, Mattea McColly and J. Erickson with four each and Longtree with one.

The Mavericks finished their season in the third seed headed into the District 1-C tournament. North Country will face Richey/Lambert in round one on Thursday, Oct. 28 at 3 p.m. The two teams previously met Sept. 9 and North Country won the match in three sets.

"Going into District Tournament, it really is all about the volleyball team that has put things together and are rolling with momentum," said head coach Charlene Wasson. "The regular season is over and a new season is beginning on Thursday." She expects Richey/Lambert to come out ready to play and give everything they have in the match. Of her Mavericks she said, "We need to go into the tournament doing our jobs and what we practiced all season long so we can leave Scobey knowing we gave our best effort."