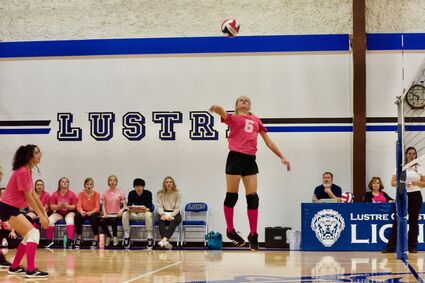 Lustre Christian's Grace Brown winds up for a hit during the Lions' match against the Nashua Porcupines Oct. 16.

The Lustre Christian Lions young volleyball team played three matches last week, taking on the Glasgow JV team, Froid/Lake and Nashua. Though the team lost the three, they continue to show growth on the court.

Grace Brown and Alexa Redding led the Lions in kills with 8 and 6, respectively. Redding also led in blocks with 3. Aubri Holzrichter and Sarah Dahl led Lustre Christian in aces with 4 each. Brown had 15 digs and Rebekah Jossart added 11 for the Lions. Holzrichter registered 8 assists.

At home again on Saturday, Lustre Christian hosted the Nashua Porcupines for Pink Night. Nashua took the match in three but Lustre kept the games close 25-21, 25-19, 25-14 in front of an enthusiastic home crowd. The Lions amassed 14 kills, 4 blocks, 11 aces, 49 digs and 6 assists.

Redding and Brown each had 5 kills to lead Lustre. Redding also led in blocks with 3. Holzrichter had 5 aces and Gibson added 4 to lead the Lions. Redding had 13 digs, Brown 10 and Jossart 9 for the home team. Holzrichter had 6 assists in the match.

Lustre Christian hosted the Scobey Spartans on Oct. 19. A play-in game for the District Tournament will be held Tuesday, Oct. 26, with opponent, location and time to be determined.

The Lions will hit the court again for the Class C Volleyball District Tournament which will be held in Scobey, Thursday through Saturday, Oct. 28-30.