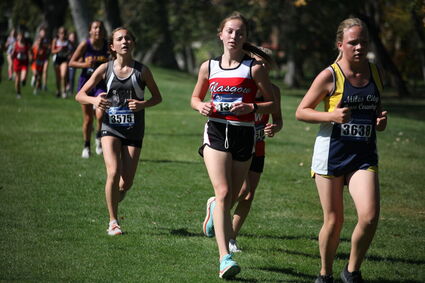 Glasgow Middle School's cross country squad took advantage of a flat, fast course at the Miles City Town & Country Club to establish a number of season-best times, as they competed in one of the largest events of their fall season.

The Scottie girls tied for second place with 101 team points, sharing the runner-up billing with Laurel. Poplar won the girls team title with 63 points. Eighth-grader Kimber Dulaney continued to pace the Glasgow team, taking fourth place in the 126-runner field with a new personal record of 9:55. It's the first time she's broken the intimidating 10-minute barrier for the 1.5-mile race.

On the boys side, Glasgow finished in 11th place behind the efforts of just five runners. The field included 146 runners from schools across the eastern half of Montana and western North Dakota. The top Scottie was 6th grader Garrett Thompson, who finished in 47th place with a time of 10:34.

"I was pleased with the level of competitiveness that we brought to the race, and nearly every Glasgow runner set a new PR, or personal record," says GMS coach Andrew McKean. "That's our goal in every race, to push to a new level. We always look forward to the Miles City course. It's flat and fast, and though Saturday's temperatures were uncomfortably warm, the runners found a way to make the best of some stiff competition."

McKean said he was especially impressed with Dulaney, who broke 10 minutes after leading the race through the mile mark. Six other girls set PRs, including Chloe Lamb, who dropped over a minute from her previous best time. Three of the boys also established new PRs, including Thompson, who has been dropping his time in nearly every race this season.

The GMS teams are on the road to Sidney next Saturday. 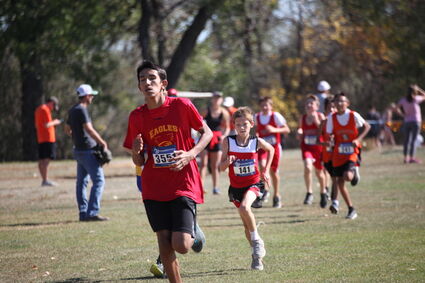 Garrett Thompson barrels down the home stretch at Miles City Invitational Meet on Saturday. The Scottie 6th grader has led the team most of the season.

The Glasgow Middle School football team traveled to Wolf Point on Oct. 2. The seventh- and eighth-graders brought home a 42-0 win over the Wolves.