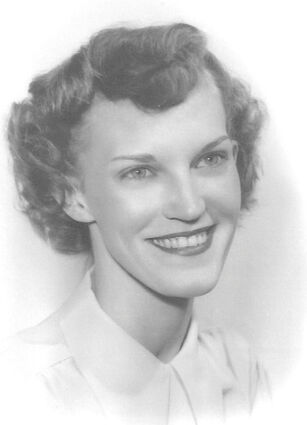 Muriel Pischel died at age 95 peacefully with her daughter, Sherrie, at her side.

She looked forward to going home to be with her Lord and Savior.

Salutatorian of her graduating class in Outlook, MT, Muriel went on to earn her teaching certificate.

She taught all grades, all subjects, including music and art; first in McElroy and later Raymond, MT. Her room in the back of the country school houses came with a peg, a shelf, a cot and a stove on top of a desk.

An accomplished musician, she played both the piano and the organ. After working for hours on a difficult classical piece she would break out in song and rhythm with a ragtime number or a 40's swing favorite. She played and we danced the Schottische in the living room.

During WWII, she joined her sister, Lillian in Virginia and worked for the Red Cross. Later, working at the Hot Shoppe in Washington, D.C., Edward R. Murrow was one of her customers.

There she shared a bedroom at a boardinghouse with Gladys, another waitress. Each got two drawers in the chest and two hangers. With one small bed, it worked out, as they worked different shifts. They loved going to hear Tommy Dorsey at the National Theater.

An early advocate for civil rights, she spoke out on behalf of her fellow workers. Later she would voice her support for women's rights against stalking, rape and domestic abuse.

She returned to the plains, settled in Williston, ND where she met Gordon Pischel, from Glasgow, MT, whom she married.

She worked at Woolworth's in Glasgow, as a bookkeeper, until her retirement.

Muriel and Gordon were super grandparents; camping and traveling with their grandchildren every summer.

When they retired, they went on the road as nomads for over 30 years, enjoying the desert and mountains while meeting family and friends along the way.

They loved traveling in Europe with her sister, Carol and brother-in-law, Owen. Renting a car, they enjoyed the sights, food and music, visited wineries and breweries, and shared history and stories with the local people they met along the way.

Muriel was an avid reader until the age of 90 when her eyesight failed. Family read to her and she remained sharp as a tack with quizzes and puzzles.

She was game for funny stories and practical jokes.

Her latest claim to fame (after the bruises healed) was being hit by a runaway bathtub full of beer, at the bathtub race held on the highway, after the parade at the all class reunion in Outlook MT.

It hurt for awhile, but later brought many good laughs.

A woman of quiet faith, she will fondly be remembered as loving, curious, supportive, funny and ethical to the core.

Her grandchildren recall her kindness, humor and laughter at the antics of her two cats. A loved daughter, wife, mother, sister, aunt, and grandmother, she will be missed greatly.

A note of thanks to the home caregivers over the past two years; Kelly, Carla, Risa, and Rykah, Sunshine's Haven, Franciscan Hospice and Edwards Memorial.

The family wishes to acknowledge the many expressions of love and kindness shown to them during this time.