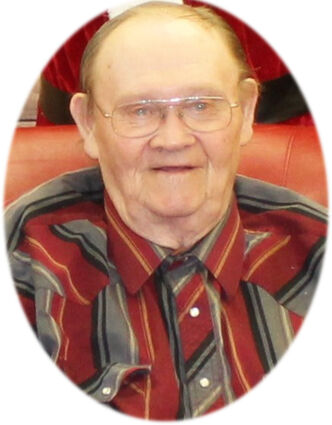 Wayne Elmer Nybakken, age 88 of Glasgow, passed away at Valley View Home on Sept. 9, 2021, after a long battle with cancer -with loving family at his side.

Wayne was born Aug. 11, 1933, in Frazer, the first child to parents Elmer and Bernice (Johnson) Nybakken.

He was raised on the family farm north of Nashua where he helped with the farm chores and enjoyed his horse, Domino.

As a youngster, he learned to run and repair machinery, wanting to know what made the machinery "tick."

Wayne and younger sister Shirley attended schools in Nashua. His first car had a rumble seat, and many hot rods followed. Wayne had rheumatic fever as a child and spent many weeks bedridden. After graduation Wayne took on more responsibilities with the farm.

In 1955, he was drafted into the Army, and trained in Fort Knox, Kentucky as a track wheel mechanic, before being sent to Korea where he served as a Tank Mechanic.

He was proud of his service but did not speak much about his time in Korea until one of his great nephews interviewed him as a school assignment, and he shared stories.

After an honorable discharge, he returned to Montana and the family farm that had been homesteaded, in 1917, by his grandmother.

During his ownership of the land, the farm celebrated that it was a Centennial Farm, having been owned for 100 years by the same family.

Wayne was known for his quick wit and comebacks and delighted in making people laugh. Coffee hour or any gathering with Wayne always left everyone laughing and repeating his latest quip.

He was a founding member and officer for the Nashua Sleighers Snowmobile Club and he put his mechanical skills to work as he assisted many in the community to keep sleds in good repair and running. He especially liked the snowmobile races.

He also helped to form the Nashua Car Club and enjoyed many car trips around NE Montana with the club, often taking his great nephews and others along for the ride.

When his nephew David began to race stock cars at Duck Creek, he was in the pits, helping to make sure to gain the most power and speed.

When tractor pulling became popular in the area, he was a top mechanic on the tractors, finding out what made it tick and how to "tick" with a little more horsepower.

Wayne subscribed to and read all the mechanic, Motor Trend and Hot Rod books that have passed on to a great nephew.

Wayne spent many winters in Arizona enjoying the weather and times with his cousin Bill Brooks, who lived next door and made many friends.

He returned to the farm for the sumers.

He was part of the Bergies and One Stop coffee crowds, telling stories and entertaining everyone.

Later in life, when Wayne retired from farming, he commented that he could quit farming because he had found a guy who liked farming so much that he actually paid Wayne to farm his land.

About ten years ago, he moved into Prairie Ridge, sharing an apartment with his mother, and happily resided there, going to MacDonald's and around town to meet coffee buddies.

He enjoyed driving about the countryside to see what was going on, observing crops and stopping by to visit with people.

Cancer first struck Wayne about-25- years-ago. He took many treatments, such as chemo and radiation to beat it back.

He also became an authority on alternative methods to treat the deadly disease and researched many books and helped to hold it at bay for many years.

He was courageous in battling and often shared his research with others.

When he decided to resign the battle and it became painful, he moved to Valley View, and his nieces and nephews gathered around him to provide round the clock comfort care. When the medicine allowed, he could still tell stories and give a quick comeback.

A Celebration of Life with military honors will be conducted at 2 p.m. Saturday, Oct. 2 at Bell mortuary in Glasgow with pastor Bonnie Novak officiating.

Friends and family are invited to come and share their favorite "Wayne quips."

A reception will follow the service at the VFW. A private burial will take place next to his parents at Highland Cemetery.