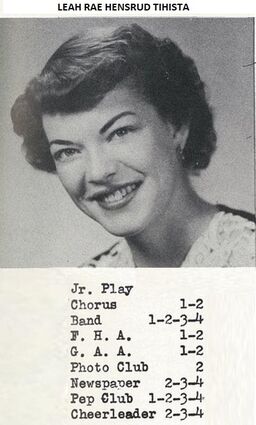 Leah Rae (Hensrud) Tihista passed away on Aug. 11, 2021, in Richland, Washington due to complications from a stroke.

Known as "Lee-Ray" to family and friends she was born in Scobey, Montana in 1934.

Her parents Ephraim and Audrey Hensrud were farmers near Flaxville, Montana before moving to the boom town of Wheeler, Montana where Ephraim worked on the construction of the Fort Peck Dam.

In 1940, the family moved to Nashua where her father opened a retail store known as "Gambles" with two partners.

She graduated from Nashua High School in 1952 where she was active in many school-related activities including cheerleading, a talent that was passed onto her daughter and two granddaughters.

She married Jerry Tihista in 1955 and after the birth of their first daughter, Pamela, they relocated to Minneapolis, Minnesota, where Jerry attended broadcasting school.

The family then relocated to Great Falls, Montana where Maia was born.

She always spoke fondly of her years in Great Falls, wishing she could return.

In 1967 the family relocated to Washington State for a better job opportunity for Jerry. Though the marriage between Leah and Jerry did not survive, their friendship did. She focused on a 30-year career with Boeing before retiring and moving to Orting, Washington.

Leah was an avid gardener, well-known animal lover and baker of the most irresistible cinnamon rolls God ever created.

Leah is preceded in death by her mother, Audrey; her father, Ephraim and her brother Roland "Red" Hensrud.

A graveside service will be at 11 a.m. Oct. 23 at the Highland Cemetery in Glasgow.

In lieu of flowers she would be pleased if a donation was made in her name to any animal rescue organization.

Bell Mortuary is assisting the family with arrangements and condolences maybe left at bellmortuaryglasgow.com.

She will be greatly missed but knowing that she is at peace with the Lord should provide us all with some solace during this time of transition.