Scotties Shut Out Colts in Colstrip 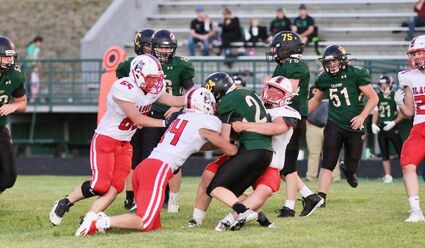 The Glasgow Scotties earned their first shut out of the season on the road in Colstrip last Friday and what a win it was. Glasgow blanked Colstrip 50-0 in the blowout victory.

In a tremendous show of teamwork, the Scotties put on a clinic offensively and defensively, rolling over the Colts on their home turf. The Scotties had eight players put points on the scoreboard, led by senior Kyler Hallock with four touchdowns.

Playing the other way, defensive coordinator Sam Tedrow exuded pride in his players. "From nearly start to finish our guys were overwhelming on defense. Colstrip has a shifty QB who gashed us a few times early, scrambling out of the pocket, but our D-line and linebackers did an excellent job of containing him on the edges as the game moved forward."

Glasgow quarterback Mason Donaldson said, "The team played well. Everyone contributed to that win. The O-line did some great pass blocking which made it possible to throw more and our receivers made some great catches." Austin Hughes said, "We were confident each play, and I was very proud of the team." He went on to add, "We stayed a team and battled adversity."

Glasgow first lit up the big board with 6:43 remaining in the first quarter when Hallock made a 45-yard touchdown run after splitting the defense. Head coach Patrick Barnett said the Scotties' slow start was really the only thing that went wrong for the team. Glasgow kicked into high gear early in the second quarter when Hallock increased the Scotties' lead to 14-0. The running back scored with a three-yard touchdown and a successful two point conversion. A few minutes later, Donaldson found Nik Burke with another long bomb to put their team inside the five-yard line. Hallock closed the deal for a 20-0 Scottie lead.

Continuing the second-quarter show, Hallock added his fourth touchdown of the game on a 33-yard run. Donaldson hit Johnson on the two point attempt to increase Glasgow's lead to 28-0. Tatum Hansen proved the Scotties were not a one-man show when he punched the pigskin in from a few yards out with 3:13 left to play in the first half. Donaldson carried the ball across the goal line for a one-yard touchdown and John Lawson tacked on the extra two for a running clock with just over 6 seconds left in the first half.

Glasgow moved to their second string players in the second half, bringing in their underclassmen. Burke and Austin Hughes agreed that was the best part of the night for them. "My favorite part of the game was seeing the younger kids getting in the game," Burke said.

Freshman Jaydeen Hanshew scored the Scotties final touchdown of the game with 8:10 remaining in the game. Senior Jake Kuka caugh a pass from KJ Ingram for the two point conversion. Hughes said, "My favorite part was when our JV guys sealed the deal for the shutout."

A number of the Scotties' offensive plays were made possible by outstanding efforts by Glasgow's defensive players. Wyatt Babb, Ingram and Devon Nesbitt each snatched a Colstrip pass giving Glasgow three interceptions in the game. Trey Johnson notched a blocked punt and a sack, while Gage Siefert and Ethan Nickels combined for the second Scottie sack. Nickels led the defense with 10 total tackles followed by Johnson with seven, including two tackles for loss, and Babb with six. "Trey was an absolute force in both the run and pass game," said Tedrow. "It was great to see the young guys get to play most of the second half and contribute to the shutout." The Scottie defense allowed no Colstrip fourth down conversions in the game.

Glasgow put up 376 total offensive yards of offense in the game. Hallock led the team in rushing yards with 104 on nine carries. The remaining yards were spread out relatively evenly between Hansen, Donaldson, Lawson, Hanshew, Ingram and Toryn Richardson. Glasgow put up 209 yards on 33 runs and scored seven touchdowns.

Donaldson notched 150 passing yards, going 8-for-12 on passing with no interceptions. Ingram, in as quarterback in the second half, added 17 yards, going 1-for-3 on passes with no interceptions. Burke racked up 96 receiving yards on three catches, including a 59-yard reception. Jack Cornwell had two catches for 33 yards and Johnson added 29 receiving yards on two catches. Richards had one catch to advance the Scotties 10 yards. 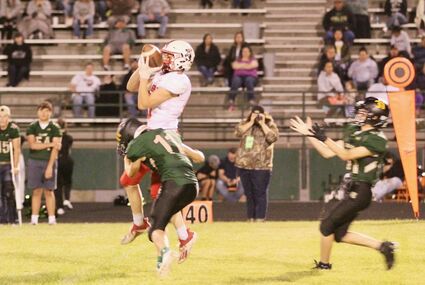 Glasgow's Jack Cornwell makes the catch despite being hit by a Colstrip Colt during the Scotties 50-0 victory Sept. 17.

Hughes said, "We were strongest on our run game, and I feel we also passed the ball well." Burke attributed his team's success so far to the Scotties' "great bond on and off of the field."

Glasgow hosts the Cut Bank Wolves this Friday, Sept. 24, with a 7 p.m. kickoff. The game will be carried live on the NFHS Network and KLTZ/KLAN.

Tedrow said, "A tough Cut Bank team will be a good test for our defense to see what kind of improvements we have made as we approach the halfway point in the season and begin conference play."

Glasgow head coach Barnett said he expects the Friday game to be tough. He noted Cut Bank is a strong and experienced team and said fans should not be fooled by the Wolves' 0-4 record since Cut Bank has played some strong football teams. Glasgow will be defending against a team hungry for a win.

In JV action on Monday in Glasgow, the Scotties fell to theclass A Glendive Red Devils by a score of 39-6 at Scottie Field.