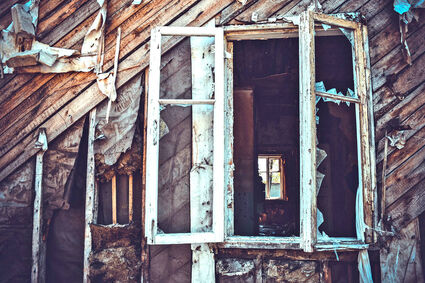 Imagine seeing an old dilapidated house. The paint is flaking off; exposing the bare wood siding to the elements. Its gutters are falling off random parts of the roof and the blinds behind the broken windows are in a state of total disorder.

This old house has not always been in this condition.

Based on its age, it looks to have been originally built in the early 1900's. I am told, houses like these were mail order kit homes offered by companies like Sears and Montgomery Ward from 1908-1940's. They were often bought by families wanting a roof over their head to raise a new family. Now that that the home has been around approximately 100 years, it now brings one thing.

In Glasgow, a house like this typically tells the people passing by it one thing, "Nobody cares anymore."

This type of dilapidation is not only seen in older homes. It if often seen on vehicles, grain elevators, railway buildings and underpasses. The Glasgow Police Department is routinely called to investigate acts of vandalism or trespass in these areas.

This theory discusses how we perceive what surrounds us, then influences our behavior towards it. When you see a broken window, it implies a certain abandonment of the building, vehicle or structure. The damage it currently has will usually make it easier for someone to add more damage.

Little by little, all the windows are knocked out and typically graffiti is added.

Fortunately for our community, we generally do not have this problem. Ninety percent of Glasgow's buildings, vehicles and structures are full of life and respectfully taken care of by their owners. The other 10% lead to most of the vandalism and trespassing calls for service.

This was the main topic of my walking patrol conversation with Patrolman Joshua Ames last evening. An area we wanted to conduct a walking patrol was the Glasgow underpass.

The Broken Window Theory topic came up when talking about the many benefits of the Glasgow Underpass Project. This project was funded by a $10,000 grant awarded by the Montana Arts Council as well as other matching funds from other business in the Glasgow area.

Mayor Becky Erickson had mentioned over the radio about how the project would strengthen the bond of its community members and local high school artists.

While walking through the well illuminated underpass walkways, the colors were clearly cheerful and encouraging. Rocks, mountains, fields and scenic skies make the underpass trek no longer a chore.

The Glasgow underpass had always had a sense of urban abandonment to it. The older dim lighting, flaking plain white paint walls covered in graffiti was nothing to be proud of.

While the Glasgow Underpass project is still in progress, it is deeply valued and appreciated by Patrolman Ames and myself.

My favorite part was the use of paint to mask the imperfections of the underpass.

The Glasgow Police Department would like to thank those involved in the project.

The volunteers for traffic control and artist involvement have been noticed and appreciated. The citizens of Glasgow consistently set good examples of how to give and take care of one's community.

The Broken Window Theory is real but not so present in the city of Glasgow.

Joshua Nolan is Senior Patrolman for the Glasgow Police Department.