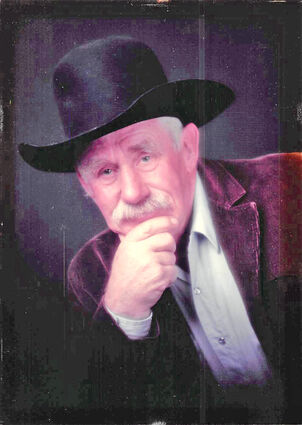 The last of the old-time cowboys branded his last calf, saddled his horse and rode into heaven on August 31, 2021 at the age of 100 years.

He was brought up in northern McCone County where he lived all his life.

He lived during a time before barbed wire- when he would ride for several days to gather the family cattle each autumn.

His horsemanship earned him a second place Bronc Riding in 1942.

Jack served in World War II as a U.S. Marine stationed in the South Pacific with the 3rd Amphibious Division.

He learned welding early in his life and he put those skills to use as an operator/driver of amphibious landing craft and led the crew in maintaining those landing craft.

When he returned from the war, he continue to ranch with his father and brothers until his marriage to Sharol Lynn (Peggy Johnson) Nickels, whom he married June 13, 1950.

They started their own ranch and together raised 3 children, a lot of Hereford cattle and some pretty nice horses.

He and Peggy lived the American dream with hard work and fortitude in building a very successful cattle ranch. Peggy passed away in March 1991.

Jack had a great sense of humor, sense of duty, knew the benefits of hard work and was respected by his friends and neighbors.

On more than one occasion, he plowed open the road to his neighbors down on Bear Creek during some of our infamous Montana winters.

He could be counted on every branding season to provide the de-horning services.

He designed his irrigation system, invested in artificial insemination to improve his herd, and loved to use his bulldozer to move dirt and build reservoirs.

Jack earned a pilot's license before WWII which was used frequently to locate cattle and check water in reservoirs as well as treat his children to rides.

In recognition of his success he was awarded Commercial Cattleman of the Year in 1990, and Soil Conservationists of the Year 1987.

A funeral service with military honors will take place at 10 a.m. Monday, September 13 at Bell Mortuary.

A luncheon to Celebrate Jack's life will take place at the Cottonwood Inn starting at 11:30 a.m.

Jack will be buried on the Nickels farm in a private ceremony.