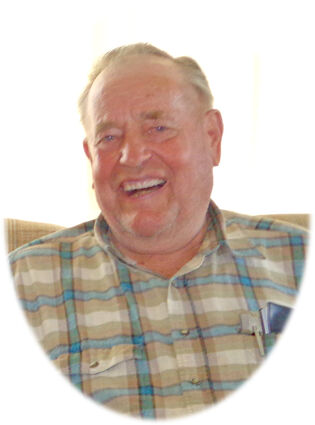 George was born February 7, 1928 at the Mimn place outside of Tampico, Montana to Ben and Caroline (Hess) Kolstad.

He was one of six children born at home and delivered by their father. His siblings are Sylvia Thomas, Betty Holden, Grace Houghton, Bennie Kolstad and John Kolstad.

George started grade school at Tampico while the family was at the Mimn Place.

When the family moved to a place closer to the river; he finished grade school at the Billingsley School which was only a quarter mile away.

After graduating from Glasgow High School in 1945, he worked for Chris and Agnes Molvig for about 5 years. He was always treated as part of their family thereafter.

In 1950, he was drafted into the United States Army with his schoolmate and neighbor, Jimmy Stensland who was only three days older than him.

He served with the 45th Infantry, Company I, in Korea for two years until he was wounded and sent home.

He was awarded the Purple Heart.

Upon arriving home, he started a nearly 53 year career as a master electrician. He worked for Glasgow Electric & Rainbow Electric. Eventually, he owned Tri-Electric and G&D Electric.

He purchased his own land in 1956 and built a home. He enjoyed having his own cattle and putting up hay.

In 1954, he married Charlotte Wood, together they raised five children: Janet, Dean, Carolyn, Darryl, and Gene.

George was one of the original members of the Whittmayer Grazing Association.

He was a lifelong member of the Glasgow VFW, American Legion and the DAV Veterans.

at Highland Cemetery in Glasgow, Montana.

A luncheon followed at the Fort Peck VFW Post #3107.