Growing for the Gold 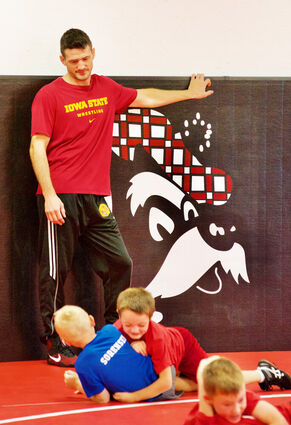 Derek St. John oversees some young wrestlers during the kindergarten through third grade session of the Glasgow Wrestling Camp on Aug. 11. This is St. John's seventh time running the ever-growing Glasgow camp.

Glasgow is a wrestling town. Boasting back-to-back state championships and a level of community support that other towns only dream of cultivating, this town turns out for its grapplers. Therefore, it's only fitting that the Glasgow Wrestling Camp is quickly becoming one of the preeminent and gold-standard camps in the state.

Under the direction of Jory Casterline, head coach for the Scotties, the Glasgow Wrestling Club and Derek St. John, head assistant coach at Iowa State University, the Glasgow Wrestling Camp has exploded in size over its seven-year run. "We keep growing every year," St. John said. "Jory and these guys, they do a great job of promoting and getting guys here. I just help out trying to get some 'names' to camp, and like I said, it just keeps growing like crazy."

From a first-year attendance of 50, the camp has exploded to well over 200 participants this year. The camp boasted 40 campers in the kindergarten to third grade age group of boys and girls. More than 120 campers were in the 4th to 12th grade boys division and the 4th to 12th grade girls portion of the camp grew to 36 wrestlers. In fact, Casterline said this year he had to provide a girls-only camp, one of only two in the state to his knowledge.

Girls from all over the state traveled to the Middle of Nowhere to learn under Alli Ragan, who directed the girls camp at the Glasgow Civic Center. Casterline praised Ragan, noting that her resume is one of the most impressive of the counselors he has brought to camp. He exclaimed, "I mean, she's a two-time second place world champion!" Her list of accomplishments as a wrestler is impressive and she brought her skills to Glasgow.

"You wouldn't think of this as a hot bed of wrestling," she said, "but the community support here is amazing." She noted that having a girls-only camp offered benefits for the campers such as the ability to learn without distraction. Ragan was assisted by a number of other camp counselors, including Jarrett Dagen, David Carr, Ramazan Attasauov, Charlie Klepps and Amara Halverson.

Halverson is herself a veteran of the Glasgow Wrestling Camp who found herself on the other side this year, working as a coach rather than as a camper. "I"m not working out as much," she laughed about the difference between coaching and participating. She walked through how the camp has grown over the years, noting that the first time she attended five years ago she and her sister were the only girls. "It's grown a lot," she said. "We have to have our own space and everything."

St. John was also impressed by the girls' numbers, though he admitted to not being as knowledgable in the area of girls wrestling. He noted that promoting and growing wrestling includes promoting the fastest-growing women's sport as well. He said, "And if want to keep the sport of wrestling around, we gotta grow girls wrestling too." He went on to add, "Wrestling teaches you a lot of different life skills, whether you're a boy or girl, don't matter."

Halverson echoed St. John, as did the rest of the camp counselors. Discipline and life skills were a common theme promoted by coaches. "After you wrestle, things get easier," she said about the self-discipline she has learned from the sport. Attasauov promoted wrestling for the benefits athletes will glean from it. "If you're going to wrestle, you're going to get some benefit from it," he said while adding the sport teaches you discipline in life.

Certainly Glasgow wrestlers have internalized that discipline and demonstrated the maturity it develops. Over and over, camp counselors commented on how enjoyable it has been for them to watch the wrestlers develop and mature. "I just like every year I see a lot of the same faces I've seen since they were knee-high to a grasshopper and now all of a sudden they've got muscles and are about to graduate high school. It's kinda crazy and it ages you a bit," said St. John. "But it's kinda cool to see how they develop as people and as wrestlers over the years when I keep coming back."

Klepps, who wrestled at Billings Senior, had experience with Glasgow wrestlers before becoming a camp counselor. "I remember wrestling a kid named Matt Reyling, who was a two-time state champion here, and they were always fun matches," he said. Now in his fourth year as a counselor, he noted, "It's also cool since I've been here for a few years, you recognize kids so it's cool to see how much older they've gotten and how much more focused. It's cool to see kids grow a bit."

"I see huge improvements, wrestling-wise and more kids," said Attasauov, while noting the camp had approximately 60 more kids this year than the first year he attended. Dagen said, "They've all improved so much. Jorey's done a good job with them. And it's fun coming and watching them mature, going for state titles and team titles. It's good to see the growth."

David Carr, who was a camp counselor for the first time this year, was also impressed with the attendees. "I've done a lot of camps and this one is really fun," he said. Carr noted that a lot of the kids were anxious to learn and eager to ask questions, as well as have fun. The 2021 NCAA Champion was asked to join the camp by St. John. "It was a no-brainer," he said. "I mean, he always talks about how food of a time he has, always wearing Glasgow wrestling gear when he's at practice. So I was like, I gotta come check it out."

Casterline could not have been prouder of his wrestling staff. The Glasgow camp is the exclusive location where wrestlers can work with St. John, who does not attend other camps according to Casterline. Having Ragan and Halverson at the camp, and in particular the girls' camp, gives Glasgow's camp unique standing in the state and attracted wrestlers from as far away as Kalispell and Butte this year.

Carr proved to be a favorite among the campers as Casterline noted how much the kids enjoyed the atmosphere. Casterline was also impressed with Attasauov's coaching. He went on to note that having Dagen and Klepps with their Montana connections helps, as does Halverson's (she is the daughter of GHS alumni Chip Halverson).

Klepps and Dagen both praised Glasgow wrestlers and noted that there are lots of wrestlers for fans to keep their eyes on in this program. One wrestler who garnered a lot of attention, which will not come as a surprise to Scottie fans, was Kyler Hallock. The Glasgow wrestler placed second at state last year in the 205 pound category and should once again be a Scottie standout. "Hallock. Kyler Hallock," Klepps said. "He's gotten huge and he looks like a freaking dude now. I think he'll be very tough." Dagen was impressed with Hallock's work ethic.

Dagen also singled out Mason Donaldson, noting he wrestled with him back when Dagen was in Belgrade and Donaldson was in Bozeman, "I like him a lot." The counselor's praise went far beyond just the two wrestlers as he said, "I honestly like all the Glasgow guys." He added, "This town is a wrestling community. They've got the community support behind them, too, so that's awesome."

"I would say keep your eye on about the majority of these kids," St. John said. "Best kids in the state up here, scrapping with each other and learning from some of the best guys ... I would say keep your eye out on this area in general." He praised the Glasgow program and encouraged anyone who has not seen the new wrestling facility to reach out to the club to arrange a viewing.

"The level of commitment this community has for wrestling, it's kinda awesome," St. John enthused. So much of that commitment comes from generations of Glasgow wrestlers who are determined to keep it going. Casterline noted that so much of the Wrestling Club's success comes from former members who are paying it forward to a younger generation of grapplers.

Their success did not come overnight though. "Surround yourself with good people," that's what Casterline attribute's his club's success to. He praised how tight knit the Montana wrestling community is and how lifelong friendships, along with wrestling's famous discipline, contributed to Glasgow consistently ranking as one of the top five clubs in the state.

His club's success along with the camp, which attracts top Montana wrestling schools such as Sidney (Class A State Champions) and Billings Senior (Class AA State Runners-up), lay the foundation for a strong high school wrestling program.

Alli Ragan works with two young girls at the Glasgow Wrestling Camp on Aug. 11. Ragan, with her impressive wrestling career, was a "big draw" this year according to Scotie head wrestling coach Jory Casterline.

The Glasgow wrestling camp is held during a rare slow summer week each year, according to Casterline, so that he can get his kids on the mats after summer sports and prior to the start of fall sports. The intense camp workouts can give those fall student athletes a jump on their conditioning he added.

Casterline went on to add that the camp scholarshipped in a number of kids this year. He said that the club provides for interested wrestlers who may have difficulty with the camp fees. "Reach out and we'll get you in," he stresses.

The Scottie head coach intends to keep growing his program as he is already looking forward to next summer's camp. He is already contemplating whether he will need to look at expanding his camp's locales to accommodate the ever-growing number of campers. Keep an eye out on this camp and the Glasgow veterans of it who promise to keep alive one of Glasgow's strongest traditions – wrestling.