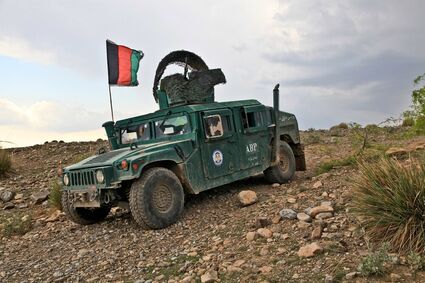 This Humvee gifted by the U.S. government for use by the Afghan Border Force, which was tasked to secure the country's borders and airports, is an example of the military hardware now in the hands of the Taliban.

After almost 20-years in Afghanistan, the United States is nearly out of the quagmire.

But with the now stale mantra of a risk for "terrorism," our country needs to be careful not to get sucked back into that black hole.

I was but a young lad when America and the United Kingdom launched Operation Enduring Freedom on Oct. 7, 2001 following the attack on the Twin Towers in New York.

That operation was absolutely justified - furious retribution for the many lives lost on Sept. 11. The subsequent invasion of Iraq and the 20-year-occupation of Afghanistan were not.

They were the fruits of the existential threat President Dwight Eisenhower warned of during a speech in 1961.

"Crises there will continue to be. In meeting them, whether foreign or domestic, great or small, there is a recurring temptation to feel that some spectacular and costly action could become the miraculous solution to all current difficulties ... This conjunction of an immense military establishment and a large arms industry is new in the American experience. The total influence - economic, political, even spiritual - is felt in every city, every State house, every office of the Federal government. We recognize the imperative need for this development. Yet we must not fail to comprehend its grave implications. Our toil, resources and livelihood are all involved; so is the very structure of our society. In the councils of government, we must guard against the acquisition of unwarranted influence, whether sought or unsought, by the military industrial complex. The potential for the disastrous rise of misplaced power exists and will persist."

Eisenhower's words echo through time, a warning not heeded during the disastrous conflict in Vietnam in the 1960s and 70s, and again ignored over the last two decades.

How many billions in taxpayer money was wasted funding the corrupt Afghani and Iraqi governments we propped up? How many good men and women in our armed forces - who deserved better than to be sacrificed for a cause not supported by the local populace who did not ask for, nor want, to become the latest American state - have died?

Far too many. Over 4,550 in Iraq and another 3,793+ in Afghanistan as of 2018, to be exact. This does not include the civilians killed in country, nor the families of veterans who have been impacted here at home.

So, now as our countrymen flee Afghanistan, I consider, why the hell were we there?

Well, invading Afghanistan in 2001 was just. That made sense. But, then we stayed.

Some said it was to spread democracy. Yeah right. You can lead a horse to water...

No, it was all about power, and later, about vanity.

Vietnam was justified by some as fighting communism and preventing its spread. But, even though the Government of the Socialist Republic of Vietnam won the war, communism did not spread. In fact, they were later invaded by the Chinese, whose butts were kicked in short order.

Now, Vietnam is considered a close ally of the United States. Ironic.

The wars in the Middle East were justified by some as fighting "terrorism," the boogeyman replacing communism after the end of the Cold War.

Those wars were about power in that they projected the might of the U.S. throughout the Middle East. It is no coincidence the United States invaded the countries both east and west of Iran. Classic pincer action.

And even when it was clear no amount of nation building nor capturing the "hearts and minds" of locals would ever lead to the optimized vision the U.S. had for either Iraq or Afghanistan, our government doggedly continued its mission.

This is where vanity came into play. We had just invested too much already, war hawks said, to pull out.

This is the military industrial complex at work.

During the height of the conflicts in both countries, circa the mid- to late-2000s, the local Army Proving Ground near my home town was testing and pumping out Mine-Resistant Ambush Protected vehicles and other weapons of war with great haste. Somebody was getting very rich.

Now, those vehicles are in the hands of our enemy because it was too costly to ship them back home.

This just means the arms companies have an excuse to create more and more weapons to replace those conveniently left behind, because now we have too, some will say.

Now, armed with American weapons of war, warlords in Afghanistan may be more powerful than ever.

Was that the end game? Was the entire effort to ensure war would never cease? That there would always be a reason to keep the military industrial complex humming along? It is a very real possibility.

Still, the absolute collapse of the corrupt Afghanistan regime and evacuation of American allies in Kabul is a sad thing to watch. I was not alive during the fall of Saigon, but it seems very comparable.

Will America ever learn policing the world is not in our best interest?

And who pays for this dearly? Those men and women who sacrificed themselves. To them is the honor, and to our government, the shame.