Making a Formal Complaint Against an Officer 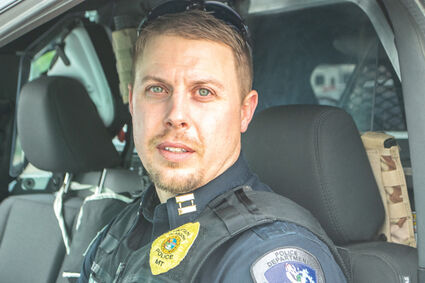 The Glasgow Police Department handles officer complaints according to the national standard. Law enforcement officials are currently one of the most scrutinized professional careers. Your police department understands that and sends your officer to countless hours and training to maintain nation standards in all areas of policing. In a previous article "Each Traffic Stop Could be a Life-or-Death Scenario," we walked through the complexities of a traffic stop.

This leads us to the next topic; which is the fall out that can occur for an officer when their service is not interpreted as professional and an officer complaint ensues. A substantial number of complaints come from misidentification of a suspect or suspect vehicle such as the case in the previous article, which in the police world, as everywhere, mistakes do happen. Just like everyone else officers are human and are susceptible to errors. Most of these complaints can be handled through a simple explanation from the officer or the Chief, but sometimes an investigation must ensue. Problems can occur if an officer did not follow policy and procedure or they were acting maliciously outside the bounds of the Glasgow Police Department. The following paragraphs will walk you through the complaint process.

If the Complaint Officer determines a crime may have been committed by an officer; an outside agency will be asked to investigate the allegation and work with the county attorney on prosecution. It is possible to have two different investigations stemming from one incident with an officer (policy violation and criminal investigation).

The designated Complaint Officer will determine the weight to be placed on the complaint. A firsthand account by a complainant who witnessed the alleged misconduct was against carries the most weight.

A second-hand account of an action carries the next level of credibility. A second-hand account is a direct witness account of an alleged misconduct relayed to another person. The last level of credibility is a complaint that was not witnessed or is a third hand account. A third hand account means the alleged misconduct was not witnessed by the complainant but they are willing to give a statement to the complaint officer. All other allegations in which a person is not willing to give a verbal, written or signed complaint carries very little weight. A complaint that has low weight will be looked into by the Complaint Officer, but the Complaint Officer by policy has no obligation to carry the investigation forward if there is no obvious violation of department policy.

The Complaint Officer will designate the case as either: unfounded, exonerated, not sustained, sustained, sustained with qualifications or misconduct based upon the complaint. The Complaint Officer will forward the entire investigation to the Chief of Police if the complaint clearly demonstrates a policy violation. The Chief will enact appropriate sanctions against the officer who violated policy.

The complainant and the department member being investigated will receive a written notification of the designation given to the complaint.

The complainant will not know if a department member was reprimanded or what the reprimand was for. If a complaint was substantiated there is an appeal process for the officer through the police commission.

That process is written into Montana Code Annotated. It is also noted that anyone found to have given a false complaint against a department member may be criminally charged.

Your Glasgow Police Department thanks you for reading this article.

We encourage our community to get involved and help make your police department better. This article was written to provide transparency in all police matters. If you have any future inquires, feel free to ask your local community officers. (406)228-8050 P. public O. officers L. linked I. in C. community E. enforcement.