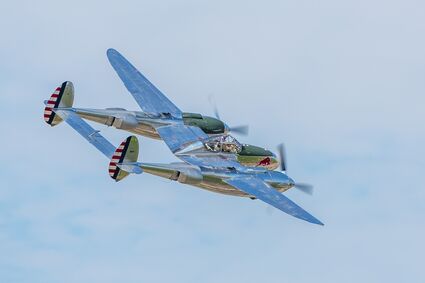 Glenn Davies was shot down while flying a P-38 such as the one seen here at an air show.

It was with great delight I recently received a letter via snail-mail from Pat Hallett of Nashua with more details about the late Glenn Davies, who rests in eternal repose at Highland Cemetery in Glasgow, flanked by his brothers in arms.

Davies, a 2nd Lieutenant for the Army Air Corps, was killed in action on Feb. 9, 1945 while serving with the 96th Fighter Squadron in the European Theater.

I could not find additional details about Davies' last mission when I came across his grave while covering Memorial Day events in late May, except that he was serving with a fighter group tasked with escorting heavy bombers attacking aircraft industries, oil refineries and other targets in France, Germany, Czechoslovakia, Austria, Hungary, Yugoslavia, Romania and Bulgaria.

I wrote this information in a photo caption on the Opinion page on 2A of the June 2 edition.

Hallett saw the caption, and began digging for more info.

She received an email from David Cull, who had access to documents concerning Glenn's final days. Cull was married to Glenn's daughter, Jean, who is now deceased.

"Glenn spent the early part of World War II helping train other pilots in California and Arizona. He was finally posted overseas in the fall of 1944, joining 96th Fighter Squadron of 82nd Fighter Group on 10th November 1944, and based in Vincenzo, Italy.

"On the morning of 9th February 1945, he was flying his P-38 Lightning with others over Yugoslavia on a fighter sweep designed to "tie down" enemy aircraft on airfields in the Zagreb area in support of a nearby supply drop.

"Suddenly, they encountered intense light (40mm) flak and Glenn's plane was hit in its belly tanks, which ignited and set the engines on fire. Glenn was told to bail out and was seen to release his canopy at about 2,500 feet.

"Then, the plane stalled out and a few seconds later, it fell out of control, crashed and burned. The crash was at the Pleso Airdrome, about five miles southeast of Zagreb, Yugoslavia.

Glenn was not seen to bail out and his body was later found in the wreckage by the Germans and buried.

"After the war, Glenn's body was disinterred and flown back to the US and re-interred at Highland Cemetery."

Thank you to Hallett for helping me find out more about Glenn Davies! I love old war stories.

And, it is good to remember the sacrifice of one of Glasgow's own during the last days of the war in Europe.

He, and all the other veterans who have served since this country was founded, are not forgotten.