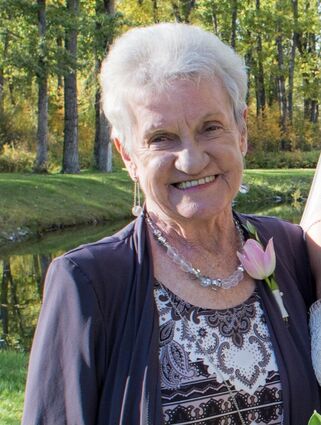 On June 26, 2021, Berta peacefully passed away in her home in Butte, Montana.

Berta was born on December 26, 1938, to Robert and Margaret Maguire. She was the third of four daughters. Berta was raised in Butte and graduated from Butte Central High School. While in Butte, she worked at Hannifin Jewelry.

She married Bill Connors on June 27, 1959, at the Immaculate Conception Church in Butte. Together, they raised six children across Montana. Stops in Dutton, Billings, Butte, Glasgow Air Force Base, and eventually settling in Glasgow, allowed Berta to touch many lives through their journey together.

In Glasgow, they bought the Dairy Queen in 1976. Berta ran the DQ and created a highly successful business. Berta then sold the business after Bill passed away in 1993.

Berta married Dave Clowes in 1996 and stayed in Glasgow. She loved to play cards golf, and read. She was an active member of St. Raphael's Catholic Parish.

Berta was a wonderful spouse, mom, grandma, and great grandma. She enjoyed following her children's high school and college games, as well as her grandkids' activities.

Berta was a faithful, lifetime member of the Catholic Church. The Mass of Resurrection will be held on August 14, 2021, at 10:30 a.m. at St. Raphael's Church in Glasgow, with interment to follow at the Highlands Cemetery in Glasgow. A luncheon at the Elks will follow.

Berta will be greatly missed by her family, friends and all who knew her. In lieu of flowers, please share remembrance to the Valley County Transit in Glasgow.