Diesel Spilt Down to Roadway 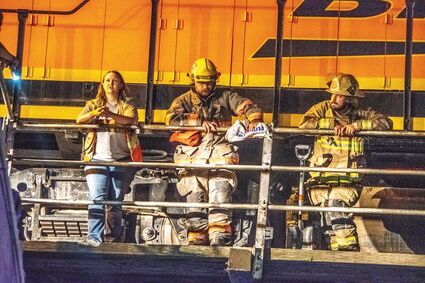 Firefighters with the city of Glasgow and Long Run Fire Departments inspect a diesel fuel leak Monday night east of the train station.

A BNSF engine with a ruptured fuel tank parked at the Glasgow Train Station leaked diesel fluid onto the roadway below the bridge late Monday night, soliciting response from The Long Run and city of Glasgow Fire Departments.

The leak was discovered at about 10:38 p.m. by a BNSF Railroad employee who noticed the smell of diesel fuel while leaving work for the night. 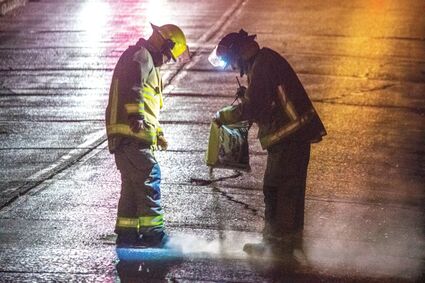 Firefighters place a drying agent to the roadway to absorb the leaked diesel fuel.

Only a few gallons leaked, said Long Run Fire Chief Sara Bryan, dripping down onto 6th Street South below the underpass where the engine was parked.

"It was not much at all," Bryan said. "It started at the top and began pouring down, a little bit. We've got a drain pan under the locomotive to catch the fuel, and put some floor dry down [on the asphalt] to stop the spreading. It will soak it all up."

Bryan said BNSF dispatched a mechanical crew from Havre to address the situation.

"I believe they notified their hazmat, also."

The locomotive had been removed from its location by 7:30 a.m. Tuesday.