By Frank and Lin Vargo
Special to the Courier

We Have Water! YAY! 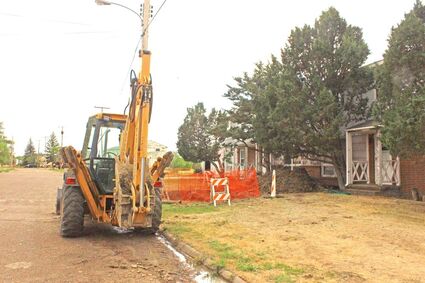 The site of the water main break in St. Marie.

I received a message from Saint Marie's Water Manager, Rob Esaias, on Monday, July 12th that he had the water main fixed.

A word of warning goes with this if you EVER have a water break. We were told to make sure you do not use your water filters right away and to run the water for awhile. This will clear the lines of silt from the pipes.

We also had been told to make sure you do not run your water through your hot water heater until the water is running clear.

Even though this was a unscheduled "vacation" from Saint Marie due to no water, our stay at Shady Rest was such a pleasant one and would like to thank our wonderful daughter and son in law for all they did for us.

Meeting people from all over the United States who were ready to travel and I have to say, most RV'ers are as nice as can be. Shady Rest owner, Cody Pederson calls it the Senior Spring Break, a release from masks and imposed restrictions! "Go For Broke" however use caution with this Covid.

Lt. Colonel William H. Follmer, our friend and former colleague in the U.S. Air Force had arrived from Hawaii and stayed with us for only four days. His last visit here was about four years ago. We have been friends with his family for over 55 years.

Bill was an expert navigator and flew missions with our squadron, the 57WRS out of Hickam AFB, Hawaii then was reassigned to Vietnam where he flew over 800 hours, again as a navigator in C-130's.

I was given a personal copy of his family only book, "An Ordinary Life."

As I began to read about his life I suggested to Bill that he should redo the title to "All But an Ordinary Live."

My gosh some of the photos that he managed to take while flying over dangerous areas in 'Nam are unbelievable.

Why, at times, he even made his own flight maps which were so much better that what was available. He was stationed at Tuy Hoa AB, Vietnam. Bill has given us permission to include his harrowing airborne adventures in a later article.

We took him to Fort Buford, where my Great, great Grandfather was First Sergeant during the Indian wars in 1876.

Before you tour the grounds of the fort you must purchase a ticket at the Confluence Center, where the Mighty Missouri and the Yellowstone rivers meet.

We were recognized somewhat because we have been able to give the historical society there so much information on Charles H. Adams, my Great, great grandfather who was stationed there. Debbie Crossland was not available at this time but we met a gentleman named Joseph Garcia whose relative works here in Glasgow with the NOAA weather department.

As we walked around the exhibit area we noticed an air of silence almost as if someone was missing.

It is an eerie feeling when this happens.

But then I asked to see our old friend, Arch Weillen, the interpreter extraordinaire. Well, that was the missing part.

You see, Arch had passed away about three years ago. What a punch in the stomach. Arch was the famous actor from Shelby, Montana who portrayed so many of the historical characters that were instrumental in the settling of the west.

For instance, Cowboy Theodore "Teddy" Roosevelt, who had a ranch nearby in Williston, N. Dakota and John Ordway to name a few. Arch would introduce himself to the crowded auditorium, the walk away for a few moments, then reappear in full period dress of that year and person.

He would go into such a portrayal of a character of the old west, that, well, it was if he was really that person. We were told that with our notices from Debbie Crossland at the Confluence Center that they would have 600 to 800 visitors from Montana.

Well, that went silent with the passing of Arch and the disappearances of the notifications of happenings.

Of course Covid-19 did not help. With this article we hope that you all can go to the Confluence Center this year and watch a wonderful display of activities sans Arch Weillen. Good bye, old friend, see you on the other side of the Great Divide.

After our visit there we went to the Pioneer Museum in Downtown Glasgow and had another wonderful visit with the girls there.

They remembered us from our first article that we did for them. However, we were told that they love our new editor, Chris McDaniel, and some have said he is a breath of fresh air.

They also suggested that they would like to see wedding announcements again, so we said that we would mention it. Now we have.

The ladies at the Pioneer Museum are so refreshing and a pure pleasure to talk to and if you see something that you do not know what it is, they will gladly look it up. But they already knew!

It all started out so innocently on the evening of June 7th of this year for a dear friend that we have known for many years now, that lives in Billings.

Samantha Basil-Darity, is a wonderful mother of 5 son's. Her thirteen year old son Justice Cole had been suffering pain with his new braces and found that by freezing the Nerf foam dart from the plastic play gun and sucking and chewing on it, it relieved the pain.

Accidentally, the foam dart ended up being lodged in his throat and he tried to motion that he was choking to his brother Micha who started to do the Heimlich maneuver on him. Cole's body became lifeless and Micha and Mischa started CPR as the ambulance came and it was the Medic's that was able to dislodge the dart but Cole had already been without oxygen for about 25 minutes.

On July 2, Samantha stated that the doctor's in Billings had given the okay to transfer Cole to Denver for rehab but the insurance company had denied the request.

As Samantha stated, "this mom is tired and I am ready to go home.. We are getting ready to take Cole home, should be the end of next week. I'm done playing games and I need to get back to some sort of new normal with my family. Will try to get Cole the extended care he'll need outside of the hospital. It totally blows my mind how insurance doesn't pay for stuff. His eyes are open but he is still unresponsive."

Samantha and her family are struggling, but very strong. They are living from day to day.

We are saying prayers and asking for prayers hoping for the best for Cole and the whole family.

There are some benefit drives going on for the family right now, due to all the expenses they have accumulated from this horrible accident.

When Justice was DENIED a special bathing chair from the insurance, "Sammy" and her friend had to balance Justice on their knees to give him a bath in the tub.

It was a tenuous maneuver to handle her almost totally flexible little boy in her arms when out of the blue an anonymous contributor delivered the $600 dollar bathing chair to Samantha.

There is a public facebook page that is called Courage for Cole.

It lists many benefit events that are going on to raise money for the family.

If you have children, small or large, be cautious with this toy. It is deadly.

Who would have ever thought that such a small toy would cause such a tragedy?