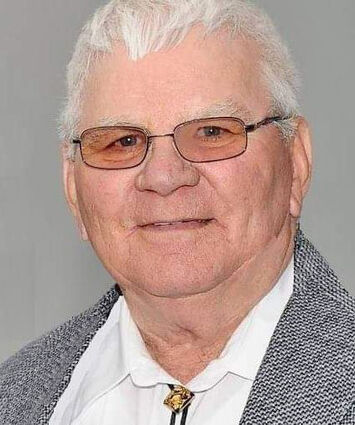 On July 1, 2021 the greatest man and cowboy we ever knew rode off into the sunset.

Elwyn "Wink" Gordon Cole was born August 26, 1934 to Jack and Melinda Murray in Devils Lake, North Dakota. At the age of 4 he tragically lost his mother.

He lived with various aunts for the next few years and due to the depression he was then placed in an orphanage where he lived for two years. At that time he was adopted by his Uncle Elwood "Buck" and Aunt Marguerite "Sis" Cole and moved to Dodson to live with them. In his formative years he spent much of his time with Sis' parents Smith and Maggie O'Brien.

Time with them resulted in some of his favorite memories as he rode horses across the prairie, worked cattle, and learned to drive while Smith shared his wisdom. Smith helped shape Wink into the man we all knew and loved.

Wink attended Dodson school where he enjoyed playing sports with his brothers Frank "Skip" and Neil Cole. He graduated from Dodson High School in 1954 and went on to work on various ranches. He was well known for his ability to work with horses and other livestock. His skills led many to believe that he should have been a professional roper.

In August of 1962 he met the love of his life, Teresa Burton, at the Phillips County Fair. It was love at first sight and they were married only two months later.

They started their life together at Cow Creek, south of Chinook. It was there that they had their first three children. In May of 1966 they moved to Dodson where they raised a few eyebrows by steadily adding more children to their family. They also frequently opened their home to any child that came to them in need of some love and stability.

Wink had a strong work ethic and ranched on his parents property, did custom bail stacking, combining, and was a brand inspector. In 1979 he started driving bus for the Dodson School District. He was beloved by many students during this time.

He drove the North and South routes as well as the activity bus for many years. This allowed him to attend his eleven children's many activities. In later years he moved to driving the bus for Malta School activities where he was known as Grandpa Wink to many.

He retired from being a bus driver in 2006. In retirement he had the opportunity to enjoy spending time with his children, grandchildren, and great grandchildren. He spent time traveling in Montana and other states visiting his large family and sharing his wisdom with them.

He never lost the twinkle in his eye and his children will happily share pictures of him clowning around, stories of songs he sang (often made up on the spot), and the nonsense nicknames he called them by.

He imparted a great deal of wisdom, usually starting those conversations with, "What the hell were you thinking?"

His mechanical ability meant that he regularly diagnosed and resolved car trouble over the phone once all of those children started driving. His amazing memory and wit never left him and are among the greatest gifts he shared.

He was preceded in death by his parents Jack and Melinda Murray, his adopted parents Buck and Sis Cole, his son Thomas, his granddaughter McKenzie Broadbrooks and his brothers Henry Murray, Leland Murray, and Skip Cole.

The family would like to add a special thanks to Theresa Ohl, FNP, Janice Reichelt, RN, and Karla Frolich, RN for being such a wonderful care team.

Cremation has taken place. A Funeral Mass will be at 10 a.m. Wednesday, July 7 at the Sacred Heart Church in Dodson, Montana. Graveside service at the Dodson Cemetery immediately following Mass.