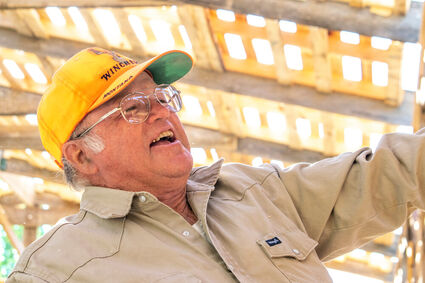 Jerry Larsen, 76, of Hinsdale, spends most days with his nephew building a 1,440-square-foot garage at the edge of town.

Astronomical lumber prices led one Hinsdale man to an ingenious work around, using used pallets in place of plywood.

And, while unintentional, re-purposing the resource is also environmentally friendly.

"I guess we have to be pretty honest," Jerry Larsen told The Courier during a tour of his build site in the north end of Hinsdale last week. "I wanted to build a garage over here, improve this land a bit, and i did not want to pay $50 for a piece of plywood. I figured out how to do this without plywood."

Exorbitant lumber prices in 2021 are the result of the pandemic stressing supply chains, according to Nasdaq.com. This includes a lack of workers to move products, as well as demand increasing due to renovation and other needed products during the global lock down.

Never one to sit it out, Larsen used his vast construction experience to find an alternative. Even the rafters of the garage, which could be mistaken for a barn due to its classic shape, are re-purposed.

"I bought all this old second hand lumber from when they remodeled the bleachers and the rodeo grounds" Larsen said. "This all came from Hinsdale Rodeo Ground,s all these old 2X7s."

"You can still see the old white paint on it," added John Lemieux, also of Hinsdale, Larsen's nephew who is helping build the garage.

"You can see that right there with holes in it," Larsen continued. "That was holding the seat brackets up."

The old wood had been stored in a pile for the past decade, covered with tin to keep the elements out, Larsen said.

"It was just sitting there. We dug through there and figured out what we had for length. I thought, 'I want to build a garage I can drive into,' so I will put a storage unit on each side. If you have extra stuff, you can put it out there."

Larsen joked many of his neighbors' garages are so full of junk, there is no room for a vehicle.

Before Larsen and Lemieux could begin erecting the wooden structure, they needed to prepare the foundation.

"John come the end of March and we started this here April 7," Larsen said. "We started on the gravel. We had to put 112-yards of gravel in here to bring this up because of the water that comes down the alley."

"Most buildings are a piece of cake for him and I," Larsen said. "We worked together years ago, too, and we could throw up walls and cover them with air nails and zippity-zip. But, you've got to by $50 plywood. Well, I wasn't going to do that. I got the pallet idea. Why wouldn't that work?"

The majority of the pallets were purchased from Nemont Distributor and CHS, the feed distribution center in Glasgow, Larsen said.

Larsen phoned Lemieux, who was living in Minnesota at the time, to talk about his plans.

"He explained it to me on the phone, and over about two or three nights I thought about it," Lemieux said. "Huh. 2X6s? Holy smoke. Just keep the outside flush so the tin will go on it. You don't care what the inside is. A lot of it I said, 'heck yeah. That can be done. There is no reason why it can't.

Looking for a reason to leave Minnesota, which was at the center of civil unrest last year, Lemieux jumped at the opportunity to come to Hinsdale.

The two have been working at a steady clip ever since. The framing for the 1,440 square foot building had been completed by last week, and the two expect to be finished installing the exterior by the end of July.

"It is pretty good size," Larsen said. "It is 12 and a half foot walls in the center and 8 and a half on the outside. We are going to start on the roof as soon as the 4th is over. Let a little bit of the heat go away."

The exterior will be covered with metal sheeting.

"The thing that is going to be a challenge is we have four colors of metal," Larsen mused. "Whoever had metal, we bought it."

Just as the framing and foundation, the plans only exist in Larsen's mind. There are no blueprints.

"The only thing us two did, was when we put these [wall frames] here together, we had to push to get them up and put them on the bottom plate. But, we got used to that. We had a technique for that too. We lifted three at one time."

Most pallets used are made of oak, and weigh an average of 55-pounds.

There was no point at which the two had to stop and redo a section, they said.

"I guess we started right there in that corner, and if you look at it, you can't find any mistakes, and we won't tell you where they are," Larsen, a true contractor, said with a chuckle. "After we had a little experience, away we went. It was just a matter of how to get at it."

Since April, the duo have been working five or six days a week to complete the project.

The two have been working for three months. Spend five or six days a week working the job site.

"A lot of Saturdays," Lemieux said. "It might get rained out, or bad weather during the week."

"In April, we were shut down a little bit because of the weather," Larsen said. "When it was real hot, we started early in the morning and wouldn't work in the afternoon."

Larsen, who is semi-retired, said it is good to strap on his work belt and boots once more.

"Oh gosh yeah. I have retired so many times. The first time I retired, I was 50 and I couldn't handle that. I went out to Arizona and built a house down there just north of Chinle Valley, up in the bottom of Utah. Its on the San Juan River. It is right there where the Navajo Nation begins no the other side of the river."

While his uncle is spry for his age, Lemieux did have to pace himself throughout the job.

The uncle and nephew duo worked together in the mid-1990s, constructing buildings in the Malta area. This is the first time they have worked together since, and it has been a good reunion, Lemieux said.

HOW MUCH WOOD COULD A WOODCHUCK CHUCK?

There are probably somewhere around 3,500-square-feet to be covered with pallets, Larsen said. If the duo had used plywood, the cost would have been enormous.

The savings from using the pallets covered the cost of the gravel and concrete, he added.

Savings were also had by doing the project themselves, Larsen said.

"We are on the bottom end of 6,000 screws on the three-inchers and we have used 1,000 two-inchers," Larsen said. "John had it figured out how many screws should be in each pallet, so that is what we done all the way through."

Every pallet has 12 screws keeping it locked in place, Lemieux said, adding he came up with a system to complete the process efficiently. 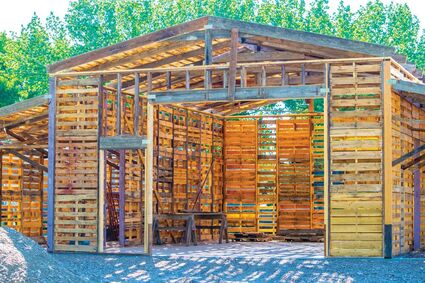 The entire building was erected with old pallets and re-purposed wood. The next step is to install the metal siding.

They didn't miss any splinters either, Lemieux said.

Once the garage is completed, Larsen plans on expanding the driveway leading to the property, and hopes to sell it to any interested party.

"It is a good piece of ground," he said. "It overlooks the Milk River. I don't know if I will, but somebody could move a modular in here and have a very nice place."

The property already has a water connection, and a power pole is at the edge. Larsen has also received clearance to install a septic system.

Larsen also may build a smaller building elsewhere on the property out of remaining pallets, if inspiration should strike.