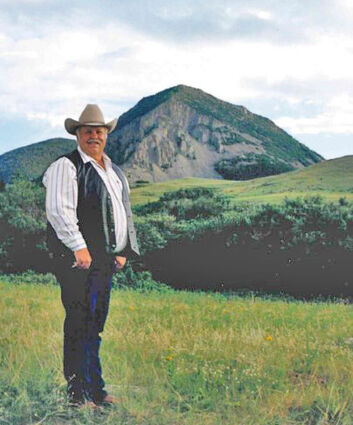 Bob was born to Dale & Helen (Helps) Keefer South of Billings, where he lived for nine years until the family moved to the ranch near Ryegate. Bob graduated from high school in 1956 and was glad to be done, as Bob was ready to implement his own entrepreneurial ideas. During high school Bob was smitten by a "spunky black eyed ranch girl" from Lavina. Bob's big plans were unfortunately delayed due to being drafted by the Army at which time he was sent to Alaska to be a Ski Trooper for two years. Upon his return Bob made his home at the Andrew Skordahl Place along the Musselshell River part of "Keefer Land & Livestock". He then headed straight to Denver to swoop up this high school sweetheart. Bob & Darlene Hansen were married on July 31, 1961, in Greeley, CO immediately drove home to a hailed-out house, barn, crops & rangeland. But did they care? NO, they were living on Love & Excitement!

To make ends meet Bob trapped beaver & mink along the Musselshell River, while Darlene milked seven cows. Black Angus heifers were purchased from N Bar Ranch and cows from Mydland Angus Ranch were added to the existing herd. This corporation also, developed one of the first pivot irrigation systems that produced corn & grain for the newly built feedlot. While living at the Skordahl Place their family began to grow; a daughter, Ronna was born in 1962 and a son, Timothy in 1965. The family than moved off the river to the expanded feedlot and facilities South of Ryegate, it was at that time that they added their last born, Deena in 1968.

At these new facilities, Golden Valley Beef Improvement Performance Association was begun to provide a service to producers to test performance of seedstock bulls, inseminate heifers and market performance cattle at an annual sale held at their ranch. At this time, they worked with various exotic cattle breeds using the Carnation Farms A.I. programs. As the years went by, Bob & Darlene continued ranching near Ryegate while his brother, Art ventured out to ranch in WA. Bob than saw more opportunities to expand and improve by purchasing and selling ranches. Starting with the "KRM" South of Malta, where they experienced record snowfall & frigid temperature in the winters of 1978 & 79. The next purchase was the "Shelternook Ranch" in the Judith Mountains, near Roy, this continued "Keefer Ranches" registered & commercial Black Angus herds, with an annual "Cattleman's Choice Herd Bull & Heifer Production Sale". Simultaneously, "Etchart Unit" North of Glasgow was purchased for the purpose of developing large farming acres, cattle numbers, and infrastructure. Sadly, compounded years of drought did not fill the grain bins and calves did not meet market weight.

Their comeback move to recapture their losses was to lease the "Booth Ranch" near Colstrip. Under Bob's tenure, miles of water line were laid to improve the use of livestock grazing in the Little Wolf Mountains. A big game enterprise was developed that produced Boone & Crocket quality elk and deer for ensuing years. Acres of turned to hay fields satisfied the needs of several thousand head through the winter months. Reclaiming behind the strip mining at Colstrip added more hay ground and winter feed grounds for calving in the Spring. It was at this time that Bob was stricken with heart problems and decided to end this lease. He and his son continued ranching at Roy until Bob semi-retired, selling the Roy Ranch.

Bob moved to Roundup and Tim to Forsyth, where he continues the name, "Keefer Land & Livestock Corporation". The purchase of the Roundup Ranch concluded his lifelong vision of developing and improving land. His last major project was the development of multiple subdivision lots ranging from 5-160 acres, each having their own beautiful view. He also expanded the home place hay base by adding a pivot. This place was sold, moving to their current home, South of Billings and in anticipation of retirement he purchased a lake house at Fort Peck. The move to Billings enabled Bob to travel to see his children, grandchildren and they were able to visit him as well.

There will be a viewing for Bob on Thursday, 7/1, 6 p.m. at Dahl Funeral Chapel in Billings. Services will be 11 a.m. Friday, 7/2, Blain Hanger at 6309 Jellison Road of Billings. Interment to follow at Sunset Memorial Gardens

• Right at end of the pavement

Memorial Donations may be made to The Yellowstone County Sheriff's Helicopter Program, Blue Creek Volunteer Fire Department, or a charity of one's choice.