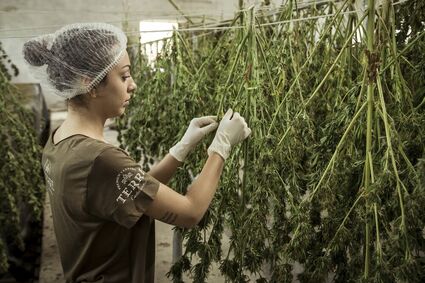 A marijuana employee inspects fresh plants hung upside to dry, part of the curing process before the buds are ready to be smoked. Such startup recreational marijuana businesses may have a hard time getting off the ground here due to strict state laws.

It seems marijuana is still a bit of a sticky-icky subject in Montana.

Last month, Governor Gianforte signed HB 701 into law. The bill outlines the regulations for marijuana commercialization, some of the most stringent among states in the USA which have legalized recreational pot.

HB 701 comes on the heals of the passage of Initiative 190, which allows for the use, production and sale of marijuana in Montana. I-190 took effect on Jan. 1. It remains technically illegal on the federal level to possess or use the plant.

The provisions of HB 701 were championed by SAFE Montana and Smart Approaches to Marijuana (SAM), political organizations strictly opposed to legalization and use of the humble little flower, which has been in the cross-hairs of the War on Drugs since the Nixon Administration. SAM is based in Alexandria, VA, and lobbies legislators across the nation with their anti-weed rhetoric.

The first is marijuana commercialization will not be automatic across the state. In the 28 counties which voted against legalization, marijuana industry activity will not be allowed without a majority vote of local residents to opt-in to legalization. On the flip side, a county where the ballot measure was approved, such as Valley County, can also hold a vote to opt-out of legalization.

This provision is, without a doubt, undemocratic. The way our republic-style democracy works is the majority wins (assuming the game isn't rigged). Sometimes your side wins, sometimes they lose. That is the price of free and fair elections.

What HB-701 declares is if people didn't like the law in place, they don't have to observe it. Talk about a precedent.

Does this apply to other initiatives passed by the majority of Montanans?

From a newspaper perspective, this eliminates a major source of revenue for an industry already reeling from the prevalence of online advertisement. And while it is true the United States Postal Service considers marijuana ads in newspapers as illegal (they issued a memo to Oregon publications back in 2015 warning them to stop placing such ads or face the wrath of the federal government), the loss of potential revenue cannot be overstated.

From a business standpoint, these two provisions have a chilling impact on the potential revenue available for our struggling post COVID-19 pandemic economy. We already tax the living tarnation out of booze and cigarettes, just imagine the millions we could use to pay for public safety and roads.

Could pot be the cure for potholes? Potentially. Just don't let the potheads fill 'em in. They might get potato chip crumbs in the asphalt mixture.

Talk about a crumby job. (Dad joke of the day. You're welcome).

Thirdly, citing tired, worn out arguments, the anti-pot lobbyists convinced state legislators to cap THC levels in marijuana flower at 35% THC. That is kind of a joke, really, because even the most potent strains in Washington State, including so-called "green-crack," are less than that. Wax, a marijuana concentrate, can have upwards of 90% THC. As such, it appears this provision was strictly political.

To be clear, there is no documentation in the history of humanity indicating an overdose on marijuana leading to death. In the words of Comedian Joe Rogan, you may "think you are going to die, but everybody lives."

Also, no one except valid medical marijuana card holders can actually purchase marijuana until 2022. But it is legal to smoke. This is a definite gray area, and will likely lead to old school moonshine style runs to other states where marijuana is sold.

People go where the water flows.

The same is clear for so-called "dry counties" which do not allow the sale of alcohol. Residents simply travel to where they can buy it and bring it on home.

Montana still has a long way to go on marijuana, but it has already taken the first step ... towards the fridge ... for more munchies.