Yep, I Was Once a Tenderfoot, and Young 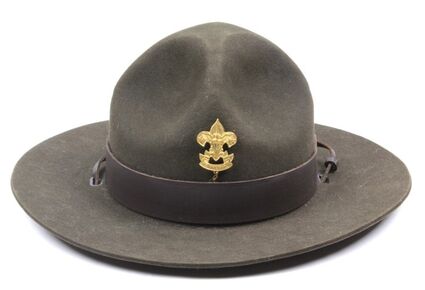 This weekend, as I was out at the Missouri River Recreation Area for Youth near Fort Peck Dam photographing and interviewing the latest crop of Boy Scouts, I was suddenly 12-years-old again and a Boy Scout myself.

It was in the mid- to late-1990s when I was in Troop 64 back in Arizona. My patrol was "The Angry Beavers." Unfortunately, the Troop no longer exists except in the memories of those who were there.

There were so many memories made in my three to four years in Troop 64. When I first joined, I was maybe 5-feet-tall and 100 pounds soaking wet. I remember the older Scouts in the Troop. In High School already, they were huge.

At the beginning, I had no idea how to tie a knot or sharpen an axe. Sure, my mom made sure I knew how to set up a tent growing up, but I had never hiked up to 10-miles in the middle of the Sonoran Desert only to set up camp at the end. I still remember the blisters made walking down a seemingly endless set of abandoned railway tracks, singing silly songs with my buddy Justin.

That night, the wind swept down out of the Laguna Mountains. It was so fierce, the tent we were in was basically sideways, inches above our sleeping bags.

Then, there was the time at summer camp in Flagstaff when a skunk found its way into Ricky and Elliott's tent. The two lads had neglected to zip up the door, and awoke to find the critter nestled between them. They freaked out. The skunk freaked out. They stank for days.

Then I thought about the canoe trips. We likened ourselves to some kind of Greek fleet out of The Odyssey, pairing off into opposing factions to commit battle on the high seas (actually, The Colorado River). The point here was to capsize the enemy before they sent you down to Davy Jones' Locker. I flew a pirate flag with pride.

Or, there were the land skirmishes. We all fashioned Stone-Age weapons out of reeds at the river's edge, or, in the case of James, tied a stone to the end of a stick. James was a member of the Navajo and Quechan Tribes, and towered above all us little white boys. He didn't ever say much, but he was great to have around, especially in "battle."

Or, there was the time our scout master Mr. Hanovich, active with the Marine Corps at the time, got completely lost with Kenneth, the latter a true nerd in every sense of the word. It finally came down to the MCAS Yuma rescue helicopter being sent into the desert canyons to find them. They did, and they made it back safe and sound.

Or, there was the time Justin and I received majority votes from our fellow Scouts to join the Order of the Arrow. We spent a day in silence at the induction event trying not to eat. And, poor Justin got charged by an angry beaver, another reason for the patrol name, when we were camping solely in our sleeping bags next to a pond. I will never forget the sound of his voice cracking as he called out in panic, unable to see because his glasses weren't on. The beaver dove into the pond at the last moment. Hilarious.

There are many, many anecdotes from my time in Scouts, not all fit for print. But the point is, even with all the changes to BSA over the 20-years since I was a member, it is such memories which will endure a lifetime. Yeah, politics has entered the arena of the Scouting experience, but I dare say the Scouts in action today will surely make similar cherished memories for themselves.

That is the purpose of Scouting, to leave the world behind while learning new skills and bonding with buddies in the wilderness. That will never change.