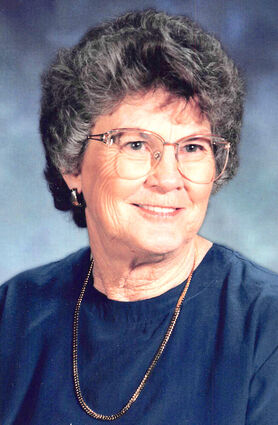 Jean was born April 16, 1931 in Glasgow, Montana to Everett and Irma (Peterson) McInerney. Jean attended school in Glasgow graduating from GHS in 1949. She then attended school at U of M in Missoula and graduated from Northern Montana College in Havre in 1951 with an Elementary Teaching Diploma. She taught school in Nashua and it was there she met Kermit Viste. They were married in 1954. She took time off from teaching to raise her five children working part-time for the City of Nashua for many years. After Kermit's passing in 1978, she then went back to work for the Nashua School.

Upon retiring she enjoyed traveling with her daughter, Connie touring Ireland, Italy and many U.S. destinations. Jean traveled thoughout Montana with her brother, Bob, to many historical sites and ghost towns.

Jean was involved with the Badland Biddies, the PDQ's quilting club and she enjoyed working in her flower gardens each year. Jean's grandchildren played a big part in her life. She attended many of their events.

She is preceded in death by her husband, Kermit; parents, Everett and Irma McInerney.

Family will receive friends from 5 to 7 p.m. with the Rosary being prayed at 6:30 p.m. on Friday, June 11, 2021 at Bell Mortuary. A Funeral Mass will be held on Saturday, June 12, 2021 at 10 a.m. at St. Raphael's Catholic Church. Burial will follow in the Highland Cemetery. Condolences may be left for the family at bellmortuarymontana.com. Memorials can be made in Jean's name to Queen of Angels Church, Valley View Home or a charity of your choice.