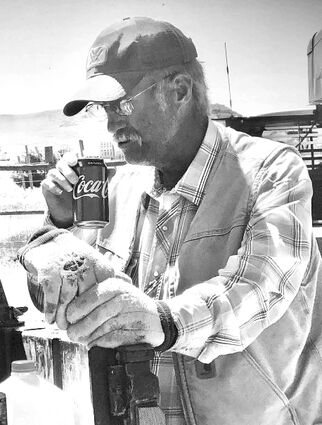 John was born 10/18/1963 in Jordan to Jerry and Delphine Coldwell. He attended grade school at Kester the graduated from Garfield County District High School.

John drove semi for a few years for Ray Jerrel Inc. He always loved trucking with Jim Willson and Tim Neiffer hauling cows to various places. John also worked for Alan Ballensky farming in the spring and summer then went trucking for Alan in the fall and winter. John always looked up to Alan. He taught John some valuable in's and out's of farming and trucking. I think John taught Alan a little too.

In 1991, John met Terri Schenk in Miles City. They were married 07/03/1992. Together they raised Robert (RJ) Schenk and April Schenk. In 1994 their son Nolan Coldwell was born. John continued farming and driving semi for Alan Ballensky until September 1998 when John moved his family to Jordan to live on the family ranch where he worked until the time of his passing.

John served as a school board member at Kester school for a few years. He was also a volunteer fire fighter (Haxby Renegades). John's Doctor from Minnesota snickered at John when John told him he helped fight the Huff fire wearing his oxygen. His doctor said he should not have done that but then again he's a farmer, they do what they have to do!

John's true passion was working on the ranch, farming, working with cattle and watching his kids and grandkids grow up. "Kids say the darnest things".

John will always be our hero, best friend and dad. Any man can be a father but it takes someone special to be a dad!!

John is preceded in death by his grandparents Robert and Ester Coldwell, Carl and Elenore Swanson, his dad Jerry Coldwell and Uncle Cole Coldwell.

There will be a joint memorial service for John and Jerry Coldwell on Saturday, June 12 at 2:00 pm in Jordan's High School Gym. A luncheon will follow at the VFW Hall in Jordan. Everyone is invited.