Ladies and Gentlemen, Hold on to Your Hats 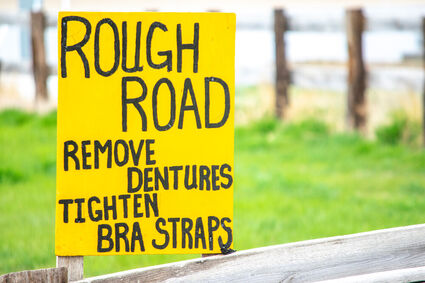 With all the changes happening here at The Courier, this sign posted along the east side of Skylark Road pretty wells sums up the entire situation.

After being in veritable lock down for about a year due to the COVID-19 pandemic in Western Washington, and witnessing the absolute unrest gripping our nation as racial tensions exploded on American streets, I decided to come out of retirement and take up pen and ink once more.

At this point in my lifetime, this country needs honest, independent journalism more than ever. It is a sacred American duty to report the news, a tradition started in the earliest days leading up to the signing of the Declaration of Independence on July 4, 1776.

In the decades before the American Revolution, small upstart publications began springing up throughout the colonies. Infuriated by increasing taxation from the British Crown, abuses of power by royal officials, and lack of representation in the English Parliament, many of these news outlets pushed political ideologies which would lead to the birth of the first representative democracy in the modern world.

The newspapers served as an outlet for the distribution of important works such as the " Letters from a Farmer in Pennsylvania to the Inhabitants of the British Colonies" in 1767, and Thomas Paine's "Common Sense." There is no doubt the dissemination of these hallmark writings helped put the colonies on a path towards independence.

It is interesting to note the job of a journalist is explicitly protected by the First Amendment of the United States Constitution. It was the Founding Fathers who understood a free press is a pillar of a democratic society.

But our freedom as journalists did not come without the cost of American blood and treasure. The American Revolution took courage. Courage to stand against tyranny. Courage to face the unknown. Courage to take that first step into a new era. Courage to accept and thrive in change.

The Courier finds itself in the midst of change today. It is entering a new chapter, one marked by fresh faces in the newsroom and in a new building - beginning in June - in downtown Glasgow.

A favorite publisher of mine once told me, "change is invigorating." At the time I did not understand. I do now.

Yet, as change happens, let us not let go of the storied history of our scrappy little newspaper stretching back well over a century.

Arriving in this historic town, I metaphorically laid my ear onto the rail ties, gauging the rhythm of my new home. One thing I have learned is a rift seems to have developed between this paper and some of the readers it serves. While it is impossible to change the past, I hope this community will give me a chance as we step forward into the undiscovered future together.

Know that I am at bat for our city and our county. It is most decidedly a privilege and an honor to serve you in my new capacity.

To be clear, the coming weeks and months will be a bumpy one for this newspaper as we assess where we are, implement new strategies and learn from our mistakes. Change is never easy. But, as storied publisher Alexander B. Brook once said, "The Hard Way's The Best."