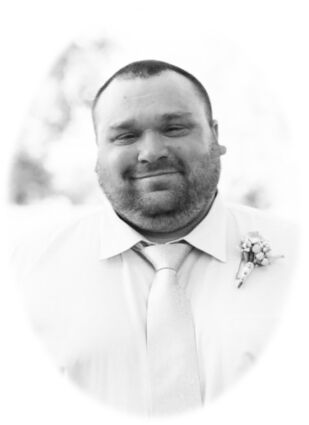 Joshua "Josh" James Marks died suddenly at his home in Williston, North Dakota the evening of May 3rd. He was 41 years old.

Josh was born February 13, 1980 in Winona, Minnesota to Jim Orlikowski and Pam Sleeper.

He was a happy boy who seemed to be older, and bigger, than his years. One of his first words were "cokefries". He would belt it out to get his mother to head to McDonald's. He always loved being outside. Josh was a year and a half old when his sister, Kristi was born. He was not impressed! The family moved around in his early years, finally settling in Glasgow, Montana in 1986. In 1987 when Josh was seven, Pam married his dad, Bill. Shortly after, Adam was born, and Josh finally had the brother he always wanted.

In the summer of 2000 Josh married the love of his life Jodi Turner. They welcomed their first daughter Ariel that September. Gabrielle arrived three years later. Always working to better provide, Josh moved his family from Glasgow to Ray, North Dakota. While there, he worked in the oil industry. Their son Jeremy completed their family in 2009. He, Jodi, and the three kids moved to Williston in 2010. They welcomed their first grandchild Andros in March 2021. Josh had so much love for his little "Noodle" as he called him. He could not wait to get home and have some Noodle time.

Joshua had many loves including the guitar, music, pets, motorcycles, movies, and the "Chiefs" but his greatest love was family. He was an awesome big brother, and he adored his nieces and nephews. He had a tremendous love for his mom and dad whom he admired. Family could always count on Josh to be there when they needed him. Josh made friends easily and many shared his interests. He maintained these friendships throughout his life. He learned to play guitar early in life and started his own band with friends. You would often see him with a guitar in his hands. His daughter Gabby shared his love for football and the Chiefs. Josh loved to read, and he and his mom shared a love for Steven King. Josh loved a great movie and had many favorites from his childhood. He regularly called Ariel to come over and "watch something scary". Always young at heart and quick with a joke. Although intimidating in stature, Josh was a big teddy bear, he was a role model of love for family. Josh worked hard and made sure his family was cared for. He had recently taken a new job as an over the road truck driver that allowed him to be home more because he was the happiest at home with his family. Life wasn't always easy for Josh, but he was surrounded with family, love and patience!!

Joshua is survived by his wife, Jodi; daughters, Ariel (Zeric) and Gabby; son, Jeremy and grandson Andros. He leaves behind his parents Bill and Pam, his sister Kristi (Rick) and brother Adam (Tory).

Although he was taken to soon, we know he is riding in the mountains trying to even out his trucker tan.

Celebration of his life 3:00 p.m., Saturday, May 15, 2021 at the Glasgow Evangelical Church with Pastor Seth Runner officiating. Condolences may be left for the family at bellmortuarymontanan.com.