Court is in Session 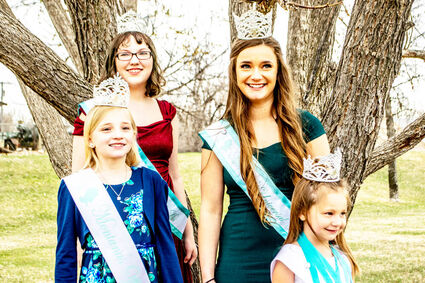 Guinevere Grace Turner, from left, Samantha Combs, Keirsten Wethern and Lyndsey Plummer received a slew of awards during the Our Little Miss state competition in Billings.

Many little girls dream of being royalty. For four lovely ladies, that fantasy is now a reality.

"I have been dreaming for it my whole life," said Lyndsey Plummer, 6, a kindergartner who earned medals for her Vintage Wear, Casual Wear and Occupational Wear during the Our Little Miss state competition. The pageant happened April 16 to 18 in Billings.

The Courier's very own Keirsten Wethern was awarded Model of the Year in addition to medals for Casual Wear, Party Dress, Vintage Wear, Sports Theme and Occupational Wear. Wethern also was awarded Prettiest Smile, Prettiest Hair and Prettiest Eyes. She also took the People's Choice awards, which was a popular vote.

Our Little Miss is not considered as a "glitz" pageant in the order of "Toddlers & Tiaras", said Brenda Combs, Samantha's mother.

"This is a natural pageant system. It is where they don't wear a bunch of makeup. 'Toddlers & Tiaras' is called the 'glitz' pageant system. This is natural wear it is age appropriate makeup. I would say it is more plain and they are focused on the person rather than the clothing."

Wethern, 23, a kickboxer, said the natural appearance on stage gave the women and girls a chance to exude their natural beauty.

"They still like you to wear makeup so your face doesn't get drowned out by the stage lights."

This was Wethern's first time in a beauty pageant, she said.

"Initially I did it to help my friend, Amber Wagoner, because she was running the pageant. I wanted to get more girls involved. I used to make fun of people who do pageants. This has given me a whole new respect for them."

Wethern, the resident wild child at the Courier office, is known for seeking out new and interesting opportunities to explore.

"I am really into trying new things and gaining new experiences. What better experience is there to gain than the opposite of what you are used to doing?"

The pageant included three days on stage. The first appearance did not count towards the final official score, Wethern said.

"It is just to get you comfortable on stage and it was so fun. You can go out and model. That is when I did my sports theme, and I got to throw some hooks out there. Yeah. It was pretty cool."

Wethern said the opening day allowed her to get in the zone.

"At first it was kind of awkward because I was like 'wow, what if I mess up? What is going to happen?' I wanted these girls to have a good role model. But after so many times, I just blocked them out and stared at the judges, because the judges are the ones who matter."

The judges were all former pageant queens, Wethern said.

Still, standing up on stage in front of an audience of strangers and being judged took serious courage.

The moms in attendance were feeling the pressure as well.

"We were pretty nervous," said Katrena Palmer, Lyndsey's mom. "It was our first time doing the pageant. There are nine in her age group and every little girl has done it at least three years prior to this. This is new and I am a sweats mom. So when they said sports wear, I said 'we've got this.' But then it was jumpers and heels so I was still lost."

The experience was incredibly empowering to all involved, Palmer said.

"I think generational trauma is definitely a thing, so my mother's shortcomings and my shortcomings become my daughters shortcomings. I have always lacked in self-confidence and to see her step in and go from being terrified the first day going in and empowered and high-fiving everyone the last day - that growth alone made the whole thing worth it."

Wethern said the experience caused some emotional growth in her as well.

"I want to be a motivational speaker one day. This competition has given me much more confidence on stage in performing and making eye contact with people. Usually when I am on stage, I like to look right above peoples' heads, and that doesn't connect with people as much. But, when you make eye contact, you lock and send your message even more."

"There wasn't much tension at all. There was a bunch of congratulations. And everyone being happy for each other."

The ladies will not sit on their laurels, but plan on participating in various community events in their official roles over the next year.

"For the next year I have to be involved in different events around the community and I have to participate in at least four different other pageants that they will be holding," Wethern said,.

"We are excited to be doing it," Katrena Palmer added. "I am really promoting and encouraging this platform as an opportunity to give back to the community."

At the end of their year reign, Gracie and Bethany completed the last of their royal duties such as crowning the incoming queens for all age divisions.

Next up is the Our Little Miss Worlds which will be from July 7-13 in Baton Rouge, LA.

The ladies are all fundraising for the trip and are accepting donations.