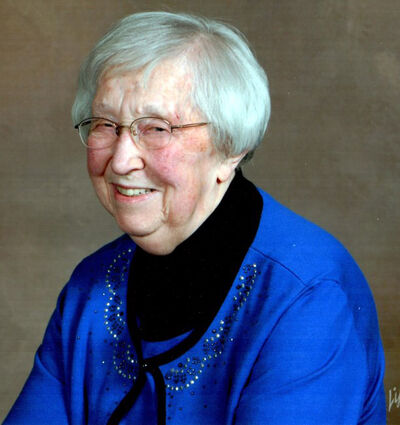 Lillian Marie Dick Toews, 93 years old, went home to be with her Lord and Savior on Sunday March 28, 2021. Lillian was a godly woman whose love for the Lord set an example for her children, grandchildren and great-grandchildren that will lead them all their lives.

Daughter of Claus K. and Margaret Dick, Lillian Dick was born on January 12, 1928, in Lustre Montana. Born and raised in a Mennonite farming community, she received Christ as her personal Savior at a revival service at the age of 12. The following year she was baptized and joined the Mennonite Brethren Church.

Lillian graduated from Glasgow High School in 1947. On May 21, 1948, she married Harold Toews, her lifelong partner of 53 years. From his loving martial union, they were blessed with four loving and devoted children-- Daryl, Les, Donna and Norm. Lillian and Harold were dedicated to developing a home of love and support, with an emphasis on the importance of daily devotions, hard work, participation in sports, music and education.

In 1976, the near fatal accident of their son, Norm, proved to be a life-altering event for Lillian. From that point on, her dedication to her son's recovery was endless and unmatched.

As their focus on farming in Lustre changed, Lillian and Harold moved to Idaho and ultimately to Olympia, WA. No matter where they made their home, her life was one of service. Lillian spent years teaching Sunday School and chairing food committees while in Lustre. One of her more notable accomplishments was her assistance in spearheading the original Lustre Schmeckfest.

Upon moving to Olympia, WA she continued to serve at Westwood Baptist Church assisting with kitchen duties and providing snacks for her Sunday School class. Well known throughout her community as the "Cookie Lady", Lillian always had a supply of home baked cookies to share with family, friends, neighbors, Sunday School class members, and church summer programs for kids.

Though she was a humble, gentle-spirited woman, she was nonetheless a powerful prayer warrior. Daily she prayed for each of her children, grandchildren and great-grandchildren by name. Only heaven knows what an eternal impact all her many years of faithful praying had on her family, her friends, and the world at large.