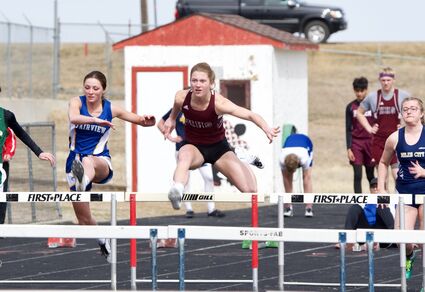 Hinsdale's Kaitlyn McColly leaps out to an early lead in the girls 100 meter hurdles at the Glasgow Invitational Track Meet on April 1.

Spring was in the air and so were an untold number of athletes last Thursday at the Glasgow Invitational track meet. Twenty-six schools and more than 564 tracksters hit the ground running and jumping, a significant increase from the 2019 meet with 26 schools but only 384 athletes. Mother Nature surprisingly cooperated for the first meet of the year, with mostly clear skies and a breeze that became somewhat stronger as the day went on. At the end of a beautiful day, Hinsdale stood atop the Girls and Boys standings with 52 and 76 points respectively.

Hinsdale head coach Taylor Olson said, "Our kids are confident and love to compete. The way they finished two years ago and missing out last year, they have been motivated in the weight room and in their speed training." That motivation was on clear display as the Raiders showed what they are made of.

Olson added, "We knew what they are capable of, but did not know what to expect after nearly two years. Some of their marks are incredible for the first meet." Indeed, the Raider boys also racked up a number of impressive performances.

"I really didn't have too many expectations for our meet – we just wanted to get the kids some experience. Only four girls and 11 of our boys had ever participated in a high school track meet before, so to just get that first experience was huge for them," Glasgow head coach Tim Phillips told the Courier. "I think overall we were very pleased with the efforts of all our kids."

"For the girls, Iris and Emily looked pretty solid. I thought Iris ran a tremendous tactical race in the 1600m, Emily had a great finish to get second in the 3200m. Tyann [Graham] didn't have her best shot put day, but she's been working REALLY hard on that. Sometimes you come out a little flat, but in the end her hard work will pay off. I bet she's over 30 feet this weekend," Phillips said of his girls team. "It was good to see Kira place in the vault, with Tyann just behind her. We haven't gotten much work in there yet, so lots of great things to come! And, Blaire wasn't real happy with her 100m time, but her form is so much better - she'll make some great gains in the next couple weeks too!"

"Dalton Sand had a couple really stout races in the 1600 and 800 - that 800m time was a 10 second personal best! Bergen Miller had a huge personal best in the discus - he threw 15 feet farther than his previous best. And, of course Stephen Bailey's win in the pole vault was big - that was a 3 foot personal best for him! The state qualifying mark is 12' 3" so he is right there. Stephen is a different athlete this year - we saw that when we did our Olympic Games day a couple weeks ago. He's a lot more confident this year!" enthused Phillips. "Carl and Lane [Thompson] ran some good distance races - they've been training all winter and I think they will both break out some really fast races in the next couple weeks. And though Tatum Hansen didn't place in the 100m, he wasn't far off: for a freshman in that race, that was really good!"

Nashua's Tia Dees was the only Porcupine to break into the top six at the meet, placing fifth in the shot put (32'9.5") and fifth in the discus (95'7"), but Nashua had their own successes, not reflected on the score sheet. "I was really happy with how the kids performed," said Janice Rorvik, head coach. "We had almost all of them achieve new PRs and the season is looking really promising."

Jasiah Hambira placed the Lustre Christian Lions on the board. He placed third in the high jump with a height of 5'6" and fifth in the long jump with a distance of 18'.

Glasgow had been scheduled to attend the Cal Wearley Invitational in Havre on Wednesday, April 7, but the meet has been postponed indefinitely. All Valley County teams are now scheduled to participate in the Wibeaux Invitational track meet in Glendive this Saturday, April 10. 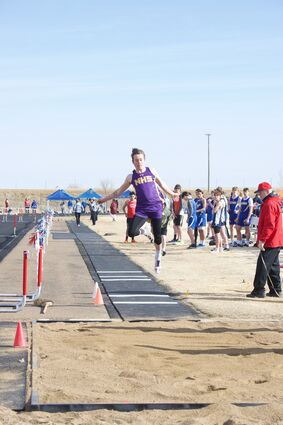 Nashua's Jace Nickels flies through the air in the long jump at the 2021 Glasgow Invitational Track Meet on April 1.