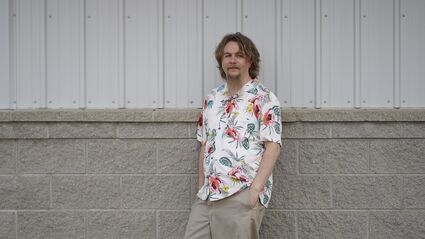 Chris McDaniel is the new news reporter for the Glasgow Courier. He enjoys drumming, fast cars and fact based news.

Chris McDaniel has taken up the mantle of news reporter for The Glasgow Courier. This long time newspaper veteran has previously reported for four newspapers in four counties in three states.

His most recent gig was as arts editor for the Port Townsend and Jefferson County Leader in Washington State.

At the Courier, McDaniel will cover most hard news beats, focusing mainly on government and education news.

McDaniel is a member of Phi Theta Kappa Honors Society. He graduated from Peninsula College in 2020 with a bachelors degree in applied business management.

McDaniel is pleased to move to Montana, a coming home of sorts for him as his grandfather worked the open pit mine in Butte, Montana and his father graduated from Butte High School in 1968. On his mother's side, his forebears also passed through Montana before moving to southern Arizona to homestead on land gifted from the federal government for agricultural purposes.

McDaniel said he is very pleased to now reside in the "Middle of Nowhere," and looks forward to working with the community to provide accurate, timely and fair news coverage.

McDaniel will shortly be joined by his son, Austin, who will attend Glasgow High School in the fall. He currently lives with his chihuahua, named "Dog," in the Downtown area.