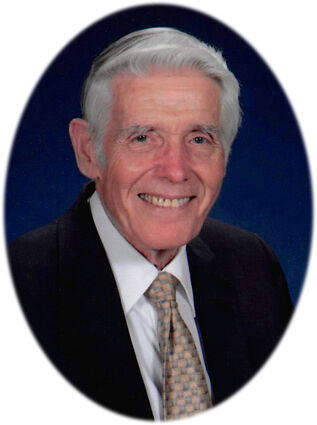 F.J. Mersen was born on July 31, 1928 in Glasgow, Mont. to Frank Mersen Sr. and Louise Opheim Mersen, to the delight of his sister, Betty.

F.J. passed away on March 27, 2021, leaving this world as sharp as a tack and remembering just about every car he sold. F.J. attended school in Glasgow through high school. He was confirmed in the First Lutheran Church in 1942. F.J. served in the Marine Corps from 1946 through 1948 where he served in the Honor Guard. He attended the University of Montana in Missoula for two years before returning to Glasgow to marry Jo Ann Nelson in July of 1950.

Through his early school years beginning when he was 12, he worked at "Perry Hanson Motors" for Les Hanson, earning $1.00 per week. Later, Les Hanson and Frank Mersen, Sr. became partners in Hanson-Mersen Motors, which F.J. purchased in 1964. F.J. sold cars for over three generations. He retired a few times, finally succeeding in 1995. He served on the Montana Automobile Dealers Association Board. In his retirement, F.J. constructed over 100 balsa wood airplanes, many of which he gave to family and friends. He was a voracious reader and truly appreciated the library for the many courtesies extended to him.

F.J. was a member of First Lutheran Church for 71 years, serving as the head usher for over 40 years where he truly enjoyed greeting the parishioners each Sunday, timing sermons and training new ushers. He served on the church council for a number of years. F.J. wielded a mean spritz gun making thousands of cookies for the church's annual Scandinavian Bake Sale. He also made all of the chimichangas and blue cheese dressing for Sam's Supper Club for numerous years.

F.J. became a Mason at 21 and a Shriner at 23 years of age. He belonged to both for over 50 years. He served as a trustee for the Valley View Nursing Home, Luke's 500, the Library Board and Kiwanis. At age 91, he was featured in a Gillette Razor Instagram post touting the merits of their shaving products.

F.J. was preceded in death by his parents, Frank and Louise Mersen, parents-in-law, Richard P. and Alice Nelson, two sisters-in-law, Shirley Nelson Wallis and Carol Nelson Bowen, his brothers-in-law Harold Garnaas, Rollie Bowen and Bryce Wallis, and nephew Robert Garnaas. He is survived by his wife Jo Ann with whom he would have celebrated their 71st wedding anniversary in July; his sister Betty Garnaas; his daughters Marcia (Russ) Brown and their children Trent and Stephanie (Mike) Maier and their children Carter, Paige and Owen; Becky (Lee) Erickson and their daughter Elissa Erickson and her son Leo Erickson; Johanna Mersen and Steve Blakeman; Jane (Jake) Callantine and their children Catherine (Curtis) Doubet and Krista Callantine; and numerous nieces and nephews.

A celebration of life will be held this summer. Memorials may be made to the First Lutheran Church, the Glasgow Library or the charity of your choice. Condolences may be left for the family at bellmortuarymontana.com.