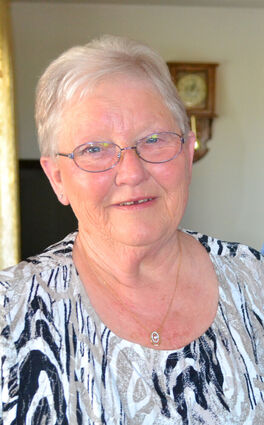 Marianne Costin passed away March 9th, 2021 surrounded by her family in the Malta Retirement Center at the age of 78.

Marianne was born September 5th, 1942 in Heilbronn, Germany. She was the last of 3 children born to Fredrick and Gertrude Scharpf. It was a difficult time during World War II and the depression immediately following shaped Marianne for the rest of her life.

Marianne finished her schooling and began working as a bookkeeper for the Knorr Company. She met Leroy in 1960 while he was temporarily stationed at the Wharton Barracks in Heilbronn. This was the beginning of a lifetime of love for them both.

They became engaged and Marianne studied to become a US citizen. She moved to Montana and they were married in July of 1963. Becoming a US citizen was one of the things she was most proud of in her life after her family. It really bothered her when people took for granted all the freedoms that are given to them as a US citizen.

She and Leroy settled down to ranching northwest of Saco. Marianne did a lot of everything those early days and learned everything on the fly. Leroy claims that she was the brains of the outfit and he provided the labor.

Marianne had three sons, David, Tim and Steven. They were all raised on the ranch where they were taught the value of work and family.

Marianne was known for her cooking skills and no one who came to help during ranching activities left early before the meal was served. You would have never known the many dishes were fed to the dog in the early years on the ranch as she worked to hone her cooking skills and worked to convert her traditional German meals with new ingredients and measurements. She knew everyone's favorite foods and tried to make sure they were made whenever they visited.

Marianne loved to garden and there was always a bouquet on the table. This provided a great sense of joy to her and others that she gave bouquets to from her flowerbeds. A special thanks to her grandson Ben for being her assistant/tiller/weed puller these last few years. She often bragged to others about how helpful he was to her.

As the years moved on, Marianne became the biggest fan of her grandchildren. Always proud of their accomplishments and taking such pride in their successes big and small. We are all surprised that the tapes of past basketball games still work from being watched so many times.

Selflessness is the best word to describe Marianne to the people who knew her the best. Always willing to listen or provide assistance whenever and however she could.

Marianne was preceded in death by her parents Fredrick and Gertrude Scharpf, brothers Wolfgang and Roland Scharpf, grandsons Spencer Costin and Landon Costin.

Services will be held March 20th at the Wilderness Funeral Chapel in Malta, MT at 2 PM.