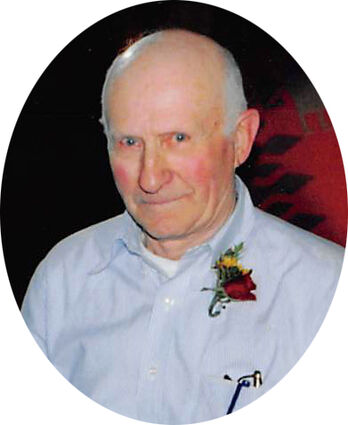 John Walker was born to Alexander and Yukona (Baylor) Mogan on October 7, 1926 in the Benson house in Hinsdale. Marion Porteen, who later became his mother-in-law, was the midwife. He joined a brother Alex and later a sister Joan. He was raised on a farm in the Genevieve Community north of Hinsdale. He attended grade school in the Genevieve Community, riding his bike or horse to school. He went to high school in Hinsdale until his sophomore year when his father passed away in a vehicle accident. John and his brother, Alex, took over the farm under the direction of Claire Duncan and Thomas Dignan. John enjoyed farming and ranching. After years of batching, he married Agnes Jones and was blessed with a wonderful homemaker and cook. To this marriage was born Dannette, Nancy, J. Gilbert, Marlin and Edwin whom John loved to read to nightly.

Wanting his children to have the best possible education, John moved in 1960 to Happy Flats where John built a home and enrolled the kids in Hinsdale Schools. John always enjoyed learning, passing that onto his children as he taught them about farming, ranching and even the constellations as he was taught by his mother. John was a lifetime reader. He could identify all the local birds and weeds. He could visit about any subject, but he loved talking about mechanics and farming.

John spent a lifetime farming and ranching. He could improvise tools to fit any situation. He and Jim Tollefson actually split a piece of John Deere equipment in two to make repairs that the company said were impossible to do. On family drives, if John saw any new equipment, he would stop, inspect it, and go home and try to build it.

John was on many boards including the FMDH, the weed district, refuse, elevator and school board. In later years, John learned to dance so he and Agnes could enjoy dancing, visiting, and meeting new people. Visitors were always welcome at the John and Agnes home enjoying good conversation, coffee, and goodies.

Family will receive friends on Sunday, March 14, 2021 from 2-4:00 p.m. at Bell Mortuary in Glasgow, Mont. Funeral Services will be Monday, March 15, 2021 at 10:00 a.m. at the American Legion Hall in Hinsdale, Mont. Burial will follow at the Hillview Cemetery in Hinsdale. Memorials in John's name may be made to the Hinsdale American Legion, the Hinsdale Ambulance Service or any organization of your choice. The family would appreciate any stories you would like to share, sent to The John Mogan Family at P.O. Box 205, Hinsdale, Mont. 59241.